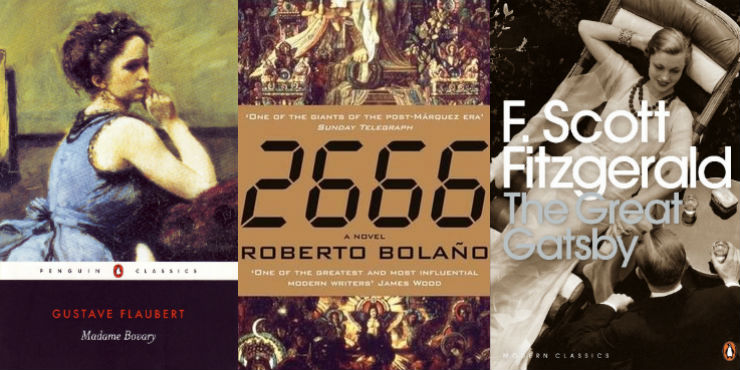 The recent BBC TV adaptation of Leo Tolstoy’s War and peace has led to a surge of interest in classic titles. If you enjoyed War and peace why not try one of the following ‘challenging’ reads?

A significant number of readers consider Tolstoy’s 1876 story of a Russian society woman who leaves her loveless marriage for the dashing Count Vronsky the greatest novel ever written. The novel explores and illuminates the deepest questions about how to live a fulfilled life.

Flaubert put much of his own life into the bored, beautiful housewife at the centre of his 1857 tale of provincial adultery. The story is now 150 years old, but readers of both sexes continue to find themselves and their friends in its pages.

Fitzgerald himself called his 1925 portrait of the Jazz Age and story of obsessive love a “consciously artistic achievement” and a “purely creative work.” It offers complicated characters who can be interpreted in fresh ways by new readers. It is also beautifully written.

Virginia Woolf called this Victorian masterpiece and detailed portrait of provincial English life “one of the few English novels written for grown-up people.” Martin Amis and Julian Barnes have both cited it as perhaps the greatest novel in the English language.

A comic tale of a humble man who fashions himself as a chivalrous knight and sets out on many adventures. In 2002, it was voted best novel by 100 modern authors.

The novel focuses on the midlife crisis of the main character, Ilya Ilyich Oblomov, an upper middle class son of a member of Russia’s nineteenth century landed gentry. While comedic, the novel also seriously examines many critical issues that faced Russian society in the nineteenth century. Some of these problems included the uselessness of landowners and gentry in a feudal society that did not encourage innovation or reform. This is beautifully written and has a lot to say about the human condition.