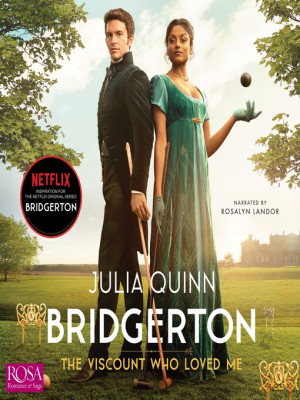 Binging the newest season of Bridgerton on Netflix? Why wait for what comes next when you can listen to the original eAudiobooks by Julia Quinn?

The Duke and I, by Julia Quinn

"Simon Basset, the irresistible Duke of Hastings, has hatched a plan to keep himself free from the town's marriage-minded society mothers..."

By all accounts, Simon Basset is on the verge of proposing to his best friend's sister, the lovely - and almost-on-the-shelf - Daphne Bridgerton. But the two of them know the truth - it's all an elaborate plan to keep Simon free from marriage-minded society mothers. And as for Daphne, surely she will attract some worthy suitors now that it seems a duke has declared her desirable...

Their ruse works like a charm - at first. But as Daphne waltzes across ballroom after ballroom with Simon, it's hard to remember that their courtship is a complete sham. Maybe it's his devilish smile, certainly it's the way his eyes seem to burn every time he looks at her. It wasn't the plan, but it seems she's falling for the duke, for real. And amidst the glittering, gossipy, cut-throat world of London's elite, there is only one certainty: love ignores every rule...

If, like us, you've noticed the Jane-Austen style historical drama Bridgerton pop up on your Netflix, you may be surprised to learn it's based off a series of books!

Listen to The Duke and I on OverDrive →

The Viscount Who Loved Me, by Julia Quinn

"1814 promises to be another eventful season, but not, This Author believes, for Anthony Bridgerton, London's most elusive bachelor, who has shown no indication that he plans to marry.

And in all truth, why should he? When it comes to playing the consummate rake, nobody does it better..." - Lady Whistledown's Society Papers, 1814.

Anthony Bridgerton needs a wife. Having spent his twenties in a rakish pursuit of pleasure (whilst taking care to ensure the financial security of his mother and seven younger siblings and mother) he knows it's high time he settled down and ensured the continuation of the Bridgerton line.

Edwina Sheffield is considered the most beautiful debutante of the current season. She is also sweet, innocent and eminently biddable - Anthony is sure she'll make a perfectly acceptable wife and vows to make her his. The only obstacle in his way is Edwina's older sister, Kate.

Kate is determined to do all she can to allow her sister the chance to marry for love rather than convenience. And the roguish viscount is beginning to think he may have met his match in Kate's keen wit and sharp tongue. Until, that is, he makes the mistake of kissing her...

Listen to The Viscount Who Loved Me →

An Offer from a Gentleman, by Julia Quinn

Sophie Beckett never dreamed she'd be able to sneak into Lady Bridgerton's famed masquerade ball—or that she would be spinning in the arms of her "Prince Charming"—the debonair and devastatingly handsome Benedict Bridgerton.

But when the clock strikes midnight, Sophie's enchanting evening ends. Since that night Benedict has been able to think of nothing but the bewitching young woman, and he's sworn to find and wed his mystery miss. Yet will another unexpectedly steal his heart—and his chance for a fairy tale love?