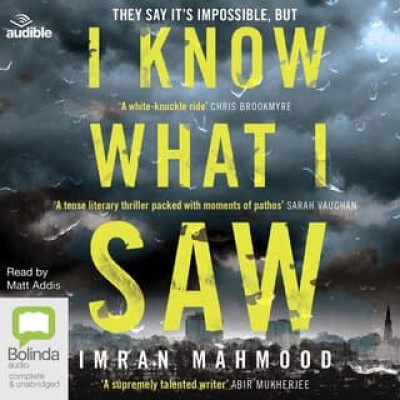 Treat your ears with these brand new eAudiobook titles for January 2022, free to listen to on our BorrowBox service with your library card.

The sequel to The Windsor Knot. In the wake of a referendum which has divided the nation, the last thing the Queen needs is any additional problems to worry about. But when a body is found in the Palace swimming pool, she finds herself once again in the middle of a murder investigation which even her best detectives can't crack.

With her trusted secretary Rozie by her side, the Queen is determined to solve the case. But when an oil painting of the Royal Yacht Britannia - first given to the Queen in the 1950s - shows up unexpectedly in a Royal Navy exhibition, she begins to realise that there is more to this murder than she could ever have suspected.

Theroux the Keyhole: Diaries of a Grounded Documentary Maker, by Louis Theroux

I Know What I Saw, by Imran Mahmood

I saw it. He smothered her, pressing his hands on her face. The police don't believe me, they say it's impossible – but I know what I saw.

Xander Shute – once a wealthy banker, now living on the streets – shelters for the night in an empty Mayfair flat. When he hears the occupants returning home, he scrambles to hide. Trapped in his hiding place, he hears the couple argue and he soon finds himself witnessing a vicious murder. But who was the dead woman, who the police later tell him can't have been there? And why is the man Xander saw her with evading justice?

As Xander searches for answers, his memory of the crime comes under scrutiny, forcing him to confront his long-buried past and the stories he's told about himself. How much is he willing to risk to understand the brutal truth?

Borrow I Know What I Saw →