We're always adding great titles to our eLibrary. We've listed some of our best new adults' and children's eBooks and music to help you choose your next read or listen.

"Wherever she is, whatever the day

"She only has one kind of thing to say.

"The Truth Pixie can only say things that are true."

The Bolds in Trouble, by Julian Clary & David Roberts

"The Bolds are back for another hilarious tale!

"This time, Teddington's wildest family have decided to stay at home and keep their heads down - it isn't always easy hiding tails and fur under clothes, and it's important not to raise suspicion amongst their human neighbours. But trouble soon comes skulking when a very sly fox starts making a big nuisance of himself. It's up to the Bolds to try and stop him - but the solution has them foxed..."

My Arch Enemy is a Brain in a Jar, by David Solomons

"Luke and his brother have swapped bodies by accident. Zack's got Luke's weird feet while Luke has Zack's SUPERPOWERS! Now he needs another world-threatening adventure to try them out. Could a family mini-break at Great Minds Leisure Park be his chance? Probably, because that's where his super-clever arch-enemy lurks, fermenting dastardly plans and bubbling gently..."

"When Fionn Boyle sets foot on Arranmore Island, it begins to stir beneath his feet ...

"Once in a generation, Arranmore Island chooses a new Storm Keeper to wield its power and keep its magic safe from enemies. The time has come for Fionn's grandfather, a secretive and eccentric old man, to step down. Soon, a new Keeper will rise.

"But, deep underground, someone has been waiting for Fionn. As the battle to become the island's next champion rages, a more sinister magic is waking up, intent on rekindling an ancient war."

"Twins Arthur and Maudie receive word that their father died in a failed attempt to reach South Polaris. But a mysterious clue leads the twins to question the story they've been told, and they join the crew of a new exploration attempt in the hope of learning the truth. Will Arthur and Maudie find the answers they seek?"

"Bracket Wood is about to be visited by the school inspectors. But there's one big problem: Ryan Ward. The maestro of practical jokes, Ryan has played so many tricks that in the end the Head Teacher just walks out.

"And then the new Head Teacher, Mr Carter, arrives. A man so strict even the teachers are scared of him. So imagine his surprise – and Ryan's – when they swap bodies. Now Ryan is Head Teacher – and his mortal enemy is one of his pupils. It's every naughty kid's dream! But soon Bracket Wood School is in a total mess – and only its worst ever pupil can fix it..."

A Spoonful of Murder, by Robin Stevens & Nina Tara

"When Hazel Wong's beloved grandfather passes away, Daisy Wells is all too happy to accompany her friend (and Detective Society Vice President) to Hazel's family estate in beautiful, bustling Hong Kong. But when they arrive they discover something they didn't expect: there's a new member of the Wong family.

"Daisy and Hazel think baby Teddy is enough to deal with, but as always the girls are never far from a mystery. Tragedy strikes very close to home, and this time Hazel isn't just the detective. She's been framed for murder!

"The girls must work together like never before, confronting dangerous gangs, mysterious suspects and sinister private detectives to solve the murder and clear Hazel's name - before it's too late..."

"Join Andy and Terry in their now 104-storey spectacular treehouse. They've added thirteen new levels, including a never-ending staircase, a burp bank, and even a mighty fortress. But Andy and Terry are in a race against time to find a funny story for their next book – will the tooth fairy, the two-million-dollar shop or even the riddles of the deep-thoughts thinking room be able to help?

"Well, what are you waiting for? Come on up!" 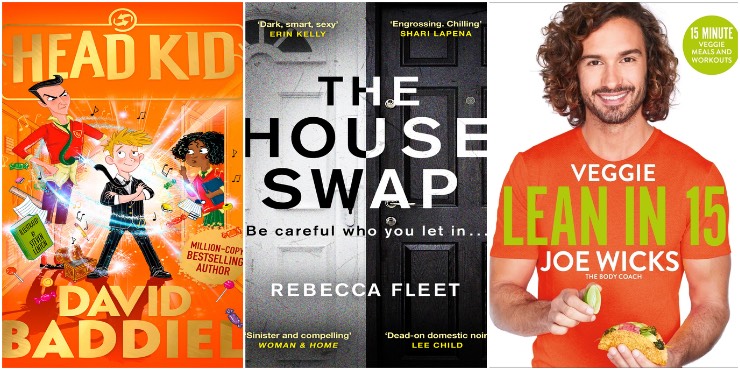 The Silk Roads, by Peter Frankopan

"For centuries, fame and fortune was to be found in the west – in the New World of the Americas. Today, it is the east which calls out to those in search of adventure and riches. The region stretching from eastern Europe and sweeping right across Central Asia deep into China and India is taking centre stage in international politics, commerce and culture – and is shaping the modern world.

"This region, the true centre of the earth, is obscure to many in the English-speaking world. Yet this is where civilisation itself began, where the world's great religions were born and took root. The Silk Roads were no exotic series of connections, but networks that linked continents and oceans together. Along them flowed ideas, goods, disease and death. This was where empires were won – and where they were lost. As a new era emerges, the patterns of exchange are mirroring those that have criss-crossed Asia for millennia. The Silk Roads are rising again.

"A major reassessment of world history, The Silk Roads is an important account of the forces that have shaped the global economy and the political renaissance in the re-emerging east."

My Life in Football, by Kevin Keegan

"In My Life in Football, Keegan tells the story of his remarkable rise through the sport, from the Peglers Brass Works reserve team in Doncaster to helping Liverpool become the kings of Europe, winning a Bundesliga title with Hamburg and captaining England. Keegan was recognised around the world as one of the sport's genuine superstars and remains the only Englishman to win the Ballon d'Or twice.

"As a manager, Keegan's five-year spell in charge at Newcastle is now legendary; he led the club from the depths of the old Second Division to the brink of the Premier League title with a breathtaking vision and flamboyant style that saw his team dubbed 'The Entertainers'.

"Fifty years since making his professional debut, Keegan tells the full story of the exhilarating highs and excruciating lows, from that epic battle with Sir Alex Ferguson and Manchester United in the 1995-6 season, as well as the pain of managing England and, finally, the shattering truth about his unhappy return to Newcastle in the controversial Mike Ashley era."

"North Korea and the USA are on the brink of war.

"A young American woman disappears without trace from a South Korean island. The CIA recruits her twin sister to uncover the truth. Now, she must go undercover in the world's most deadly state.

"Only by infiltrating the dark heart of the terrifying regime will she be able to save her sister ... and herself."

Veggie Lean in 15, by Joe Wicks

"The first veggie cookbook from the nation's favourite healthy cook and fitness sensation, Joe Wicks, aka The Body Coach.

"Get ready for Joe's vegetarian take on Lean in 15: The Shift Plan, which is the bestselling diet book of all time. Inside are a hundred flavour-packed vegetarian recipes, many of which are also vegan, plus three exclusive Body Coach HIIT workouts and a bonus abs workout.

"From Smoky Sweet Potato Chilli to 'Creamy' Butternut Pasta, Veggie Lean in 15 features a fantastic range of meat-free dishes, all prepared in fifteen minutes flat. The recipes are ideal for full- and part-time veggies, as well as those wishing to cut down on eating meat in a healthy and delicious way. There are also plenty of make-ahead ideas to get you prepping like a boss in no time at all."

The Survivors, by Kate Furnivall

"Germany, 1945. Klara Janowska and her daughter Alicja have walked for weeks to get to Graufeld Displaced Persons camp. In the cramped, dirty, dangerous conditions they, along with 3,200 others, are the lucky ones. They have survived and will do anything to find a way back home.

"But when Klara recognises a man in the camp from her past, a deadly game of cat and mouse begins.

"He knows exactly what she did during the war to save her daughter.

"She knows his real identity.

"What will be the price of silence? And will either make it out of the camp alive?"

Master of His Fate, by Barbara Taylor Bradford

"London 1884: Queen Victoria is Empress of India and Britain is at its peak of worldwide power. James Falconer works as a barrow boy in a flourishing London market owned by Henry Malvern. But James hungers for more. Turning away from family tradition, he dreams of building an empire of stores like Fortnum and Mason's and believes that Henry, along with his daughter and heir Alexis, could offer him a way to climb beyond his beginnings. But tragedy and betrayal threaten the dreams of both James and Alexis – and jeopardise everything they hold dear..."

The House Swap, by Rebecca Fleet

"When Caroline and Francis receive an offer to house swap, they jump at the chance for a week away from home. After the difficulties of the past few years, they've worked hard to rebuild their marriage for their son's sake; now they want to reconnect as a couple.

"On arrival, they find a house that is stark and sinister in its emptiness – it's hard to imagine what kind of person lives here. Then, gradually, Caroline begins to uncover some signs of life – signs of her life. The flowers in the bathroom or the music in the CD player might seem innocent to her husband but to her they are anything but. It seems the person they have swapped with is someone she used to know; someone she's desperate to leave in her past.

"But that person is now in her home – and they want to make sure she'll never forget."

Meet Me at the Museum, by Anne Youngson

"When Tina Hopgood writes a letter of regret to a man she has never met, she doesn't expect a reply. When Anders Larsen, a lonely museum curator, answers it, nor does he.

"They're both searching for something, they just don't know it yet.

"Anders has lost his wife, along with his hopes and dreams for the future. Tina is trapped in a marriage she doesn't remember choosing.

"Slowly their correspondence blossoms as they bare their souls to each other with stories of joy, anguish and discovery. But then Tina's letters suddenly cease, and Anders is thrown into despair.

"Can their unexpected friendship survive?"