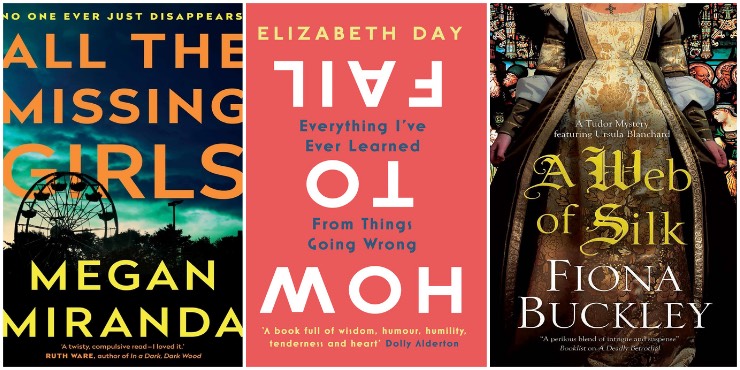 We're always adding great titles to our eLibrary. We've listed some of our favourite new eBooks on OverDrive for May to help you choose your next digital read.

"All Anna wants is to be able to sleep. But crushing insomnia, terrifying night terrors and memories of that terrible night are making it impossible. If only she didn't feel so guilty...

"To escape her past, Anna takes a job at a hotel on the remote Scottish island of Rum, but when seven guests join her, what started as a retreat from the world turns into a deadly nightmare. Each of the guests have a secret, but one of them is lying – about who they are and why they're on the island. There's a murderer staying in the Bay View hotel. And they've set their sights on Anna.

"Paige Watts is the ultimate stage mother. The daughter of Hollywood royalty, Paige channels her own acting dreams into making her daughter, Emma, a star. By the age of nine, Emma is playing a central role in a hit TV show. Then everything is shattered by unforeseeable tragedy.

"Now Emma is living with her Aunt Whitney, who had chosen a very different path from Paige. Whitney was always the career-driven older sister, loving a no-strings relationship and hating the cult of celebrity that enveloped their childhood. But at a moment's notice, Whitney must change her life in every way."

"When socially awkward Eva arrives at university, she's ready to leave the past behind. But old behaviours creep in and she finds herself ostracized, spending more and more time alone, living vicariously through social media. She develops an unhealthy fixation with her glamorous and beguiling classmate Marina – whose sparkly façade hides a thousand lies – and follows her obsessively.

"When Marina is found dead, and Eva is to found to have been impersonating her online, people have a lot of questions to ask. And Eva's reliability – and innocence – is cast into dark shadow..."

"When Lucie Kennington flees the bright lights of London for the quiet Derbyshire countryside, she's shocked to discover that the heir to the Bluebell Castle estate is far from the wizened employer she expected. In fact, Arthur Ludworth might just be the most handsome man Lucie's ever laid eyes on – and a terrible distraction!

"So when she stumbles across a legendary painting feared lost for centuries, she can't believe her luck – perhaps this is the hidden treasure to save Arthur and his family from ruin? But it's only a matter of time before Lucie's past catches up with her and by then it's too late, she's falling for him..."

All the Missing Girls, by Megan Miranda

"It's been ten years since Nicolette Farrell left her rural hometown after her best friend, Corinne, disappeared without trace. Then a letter from her father arrives - 'I need to talk to you. That girl. I saw that girl.' Has her father's dementia worsened, or has he really seen Corinne? Returning home, Nicolette must finally face what happened on that terrible night all those years ago.

"Then, another young woman goes missing, almost to the day of the anniversary of when Corinne vanished. And like ten years ago, the whole town is a suspect.

"Told backwards - Day 15 to Day 1 - Nicolette works to unravel the truth, revealing shocking secrets about her friends, her family, and what really happened to Corinne."

Too Close, by Natalie Daniels

"Connie and Ness met in the park while their children played. As they talked, they realised they were neighbours and soon became inseparable.

"But then Ness's marriage ends in a bitter divorce and all of a sudden what started as a close friendship becomes suffocating. Connie doesn't have a moment to herself, no time with her husband, no time with her kids.

"It's all too much. Something has to give."

The Godless, by Paul Doherty

"November, 1381. London has been rocked by a series of bizarre and brutal murders. The corpses of a number of prostitutes have been discovered, their throats slit, their bodies stripped; in each case, a blood-red wig has been placed on their heads. At the same time, a mysterious explosion rips through a royal war cog bound for Calais, killing all on board. Could there be a connection?

"Summoned to assist in the investigations by Sir John Cranston, Brother Athelstan uncovers rumours that the mysterious Oriflamme is responsible. But who – or what - exactly is he... and why has he suddenly reappeared after almost twenty years?"

A Web of Silk, by Fiona Buckley

"August, 1582. The queen's spymaster, Sir Francis Walsingham, has ordered Ursula to keep an eye on her new neighbour, Giles Frost, who is rumoured to be spying for King Philip of Spain. Arriving at Knoll House on the pretext of teaching his two daughters embroidery, Ursula's secret mission is to feed false information to Frost to pass on to the Spanish.

"Walsingham has assured Ursula that she'll be in no danger. But events take a decidedly sinister turn when a body is found in the woods near Ursula's home, a stained glass window is smashed and a bridal dowry is stolen. What secrets are contained within the Knoll House... and is Ursula being lured into a lethal trap?"

The Forgotten Village, by Lorna Cook

"1943: The world is at war, and the villagers of Tyneham are being asked to make one more sacrifice: to give their homes over to the British army. But on the eve of their departure, a terrible act will cause three of them to disappear forever.

"2018: Melissa had hoped a break on the coast of Dorset would rekindle her stagnant relationship, but despite the idyllic scenery, it's pushing her and Liam to the brink. When Melissa discovers a strange photograph of a woman who once lived in the forgotten local village of Tyneham, she becomes determined to find out more about her story. But Tyneham hides a terrible secret, and Melissa's search for the truth will change her life in ways she never imagined possible."

How to Fail: everything I've ever learned from things going wrong, by Elizabeth Day

"This is a book for anyone who has ever failed. Which means it's a book for everyone. If I have learned one thing from this shockingly beautiful venture called life, it is this: failure has taught me lessons I would never otherwise have understood. I have evolved more as a result of things going wrong than when everything seemed to be going right. Out of crisis has come clarity, and sometimes even catharsis.

"Part memoir, part manifesto, and including chapters on dating, work, sport, babies, families, anger and friendship, it is based on the simple premise that understanding why we fail ultimately makes us stronger. It's a book about learning from our mistakes and about not being afraid.

"Uplifting, inspiring and rich in stories from Elizabeth's own life, How to Fail reveals that failure is not what defines us; rather it is how we respond to it that shapes us as individuals. Because learning how to fail is actually learning how to succeed better. And everyone needs a bit of that. "