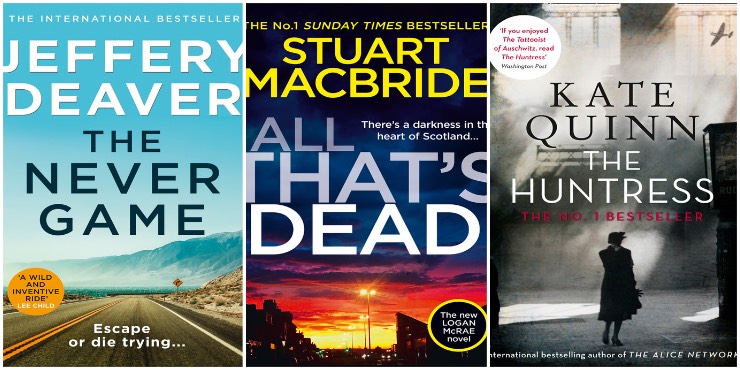 We're always adding great titles to our eLibrary. We've listed some of our favourite new eBooks on OverDrive for July to help you choose your next digital read.

All That's Dead, by Stuart MacBride

"Inspector Logan McRae is looking forward to a nice simple case – something to ease him back into work after a year off on the sick. But the powers-that-be have other ideas...

"The high-profile anti-independence campaigner, Professor Wilson, has gone missing, leaving nothing but bloodstains behind. There's a war brewing between the factions for and against Scottish Nationalism. Infighting in the police ranks. And it's all playing out in the merciless glare of the media. Logan's superiors want results, and they want them now. Someone out there is trying to make a point, and they're making it in blood. If Logan can't stop them, it won't just be his career that dies."

"Nobody visits Eerie-on-Sea in the winter. Especially not when darkness falls and the wind howls around Maw Rocks and the wreck of the battleship Leviathan, where even now some swear they have seen the unctuous Malamander creep...

"Herbert Lemon, Lost-and-Founder at the Grand Nautilus Hotel, knows that returning lost things to their rightful owners is not easy – especially when the lost thing is not a thing at all, but a girl. No one knows what happened to Violet Parma's parents twelve years ago, and when she engages Herbie to help her find them, the pair discover that their disappearance might have something to do with the legendary sea-monster, the Malamander.

"Eerie-on-Sea has always been a mysteriously chilling place, where strange stories seem to wash up. And it just got stranger..."

The Never Game, by Jeffrey Deaver

"Nineteen-year-old Sophie disappears one summer afternoon. She wakes up to find herself locked inside a derelict warehouse, surrounded by five objects. If she uses them wisely, she will escape her prison. Otherwise she will die.

"Sophie's distraught father calls in the one man who can help find his daughter: unique investigator Colter Shaw. Raised in the wilderness by survivalist parents, he is an expert tracker with a forensic mind trained to solve the most challenging cases. But this will be a test even for him.

"Soon a blogger called Henry is abducted – left to die in the dark heart of a remote forest – and the whole case gets turned on its head. Because this killer isn't following the rules; he's changing them. One murder at a time..."

I Heart Hawaii, by Lindsay Kelk

"When you're running away from real life, there's only one place to go...

"When Angela Clark's best friend Jenny invites her to join a press trip to Hawaii, three days of sun, sea and sleep sounds like the perfect antidote to her crazed life. At work in New York, she's supposed to be the face of Having It All. But the only thing Angela feels she excels at is hiding in the printer cupboard, eating Mini Cheddars and watching Netflix on her phone and if this is living the dream, she's more than ready to wake up.

"A few days away with Jenny sounds like exactly what she needs but Angela's talent for getting into a scrape guarantees nothing goes to plan – and not even the most beautiful beaches, blue skies and daiquiris will get her off the hook..."

I Know Who You Are, by Alice Feeney

"Aimee Sinclair: the actress everyone thinks they know but can't remember where from. But I know exactly who you are. I know what you've done. And I am watching you.

"When Aimee comes home and discovers her husband is missing, she doesn't seem to know what to do or how to act. The police think she's hiding something and they're right, she is – but perhaps not what they thought. Aimee has a secret she's never shared, and yet, she suspects that someone knows.

"As she struggles to keep her career and sanity intact, her past comes back to haunt her in ways more dangerous than she could have ever imagined..."

Valley of Death, by Scott Mariani

"People going missing in the remote wilds of India is not unusual. But when the son of a wealthy Delhi businessman is kidnapped just weeks after his brother fell victim to an alleged bandit attack in the mountains of Haryana, it raises eyebrows. With the local police doing close to nothing, there's only one man for the job: ex-SAS major Ben Hope.

"But for Ben, this is no ordinary rescue case. Because this plea for help is coming from a special person from his past, who now has nobody else to turn to. Ben's mission will take him into the heart of the arid Indian wilderness, pitting him against ruthless gangs and desperate men. But Ben is determined to save the day. Whatever it takes."

'The folk-memory of Britain in the years before the Great War is of a powerful, contented, orderly and thriving country. She commanded a vast empire. She bestrode international commerce. Her citizens were living longer, profiting from civil liberties their grandparents only dreamt of, and enjoying an expanding range of comforts and pastimes. The mood of pride and self-confidence is familiar from Elgar's Pomp and Circumstance marches, newsreels of George V's coronation and the London's great Edwardian palaces.

"Yet things were very different below the surface. In The Age of Decadence Simon Heffer exposes the contradictions of late-Victorian and Edwardian Britain."

"Summer is on the horizon, and the people of Porthmellow are eagerly awaiting the annual food festival. At least, most of them are...

"For Sam Lovell, organising the summer festival in her hometown is one of the highlights of her year. It's not always smooth sailing, but she loves to see Porthmellow's harbour packed with happy visitors, and being on the committee has provided a much-needed distraction from the drama in her family life (and the distinct lack of it in her love life).

"When their star guest pulls out with only a few weeks to go, everyone's delighted when a London chef who grew up locally steps in at the last minute. But Gabe Matthias is the last person Sam was expecting to see, and his return to Porthmellow will change her quiet coastal life for ever."

Capture or Kill, by Tom Marcus

"Matt Logan is an MI5 agent for the British government. Working on the frontline of counter-terrorism in the UK he's trained to protect its citizens against all threats.

"When two brothers known operationally as 'Iron Sword' and 'Stone Fist' are suspected of plotting a major terrorist event, Logan and his team work undercover to track them down. If they fail, an attack will be unleashed that will rock the country to its very core.

"Frustrated by always needing to obey the rules, Logan yearns for a way to break through the red tape that hinders their progress. His wishes seem to come true when he is offered the chance to join a new, deniable outfit known as 'Blindeye'.

"Then devastating news reaches Logan, throwing his world into turmoil. But one thing remains certain: he will join the team and become their fiercest, most ruthless operative."

The Huntress, by Kate Quinn

"On the icy edge of Soviet Russia, bold and reckless Nina Markova joins the infamous Night Witches – an all-female bomber regiment. But when she is downed behind enemy lines, Nina must use all her wits to survive her encounter with a lethal Nazi murderess known as the Huntress.

"British war correspondent Ian Graham abandons journalism to become a Nazi hunter, yet one target eludes him: the Huntress. And Nina Markova is the only witness to escape her alive.

"In post-war Boston, seventeen-year-old Jordan McBride is increasingly disquieted by the soft-spoken German widow who becomes her new stepmother. Delving into her past, Jordan slowly realizes that a Nazi killer may be hiding in plain sight."