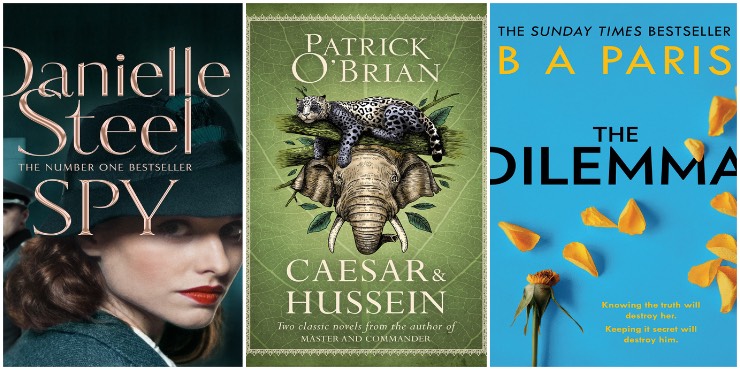 We're always adding great titles to our eLibrary. We've listed some of our favourite new eBooks on OverDrive for January to help you choose your next digital read.

The Dilemma, by B A Parris

"It's Livia's 40th birthday and she's having the party of a lifetime to make up for the wedding she never had. Everyone she loves will be there except her daughter Marnie, who's studying abroad. But although Livia loves Marnie, she's secretly glad she won't be at the party. She needs to tell Adam something about their daughter but she's waiting until the party is over so they can have this last happy time together.

"Adam wants everything to be perfect for Livia so he's secretly arranged for Marnie to come home and surprise her on her birthday. During the day, he hears some terrible news. He needs to tell Livia, because how can the party go on? But she's so happy, so excited - and the guests are about to arrive.

"How far would you go to give someone you love a last few hours of happiness?"

The Case of the Seven Whistlers, by George Bellairs

"On a cobblestoned street almost too quaint to be believed, two antique dealers named Grossman and Small have set up shop. Grossman is short and meek, while Small is large and brutish, but their partnership seems happy enough until the day when old Miss Adlestrop purchases the large oak chest in the window and finds Mr. Grossman stuffed inside it - stone dead.

"The cozy English hamlet is thrown into an uproar, overwhelming the local constabulary and requiring the services of Detective-Inspector Thomas Littlejohn. Cool-headed and never in a hurry, Littlejohn has solved his fair share of village murder cases. But when the key to the fatal chest goes missing, Littlejohn discovers the community to be so infested with jealousies and secrets that he begins to envy the dead man."

My Two Boys, by Amanda Prowse

"Thirty-four year old Natalie is pretty, smart and mum to two lovely boys. She keeps her little house in East London tidy and visits her Nan every Sunday. You wouldn't guess that she was married to a criminal and lives in constant fear.

"Then her husband is put in prison for extortion, and Natalie's life is transformed. Gone is the man who threatened her and bullied the boys. In his place is Greg, a kind, generous policeman who restores her shattered confidence, and shows her family another way to live.

"But it cannot last. For Greg is the man who helped put her husband in jail. And her husband is about to be released..."

The Crime at Halfpenny Bridge, by George Bellairs

"The waterfront pub is closing up and the sailors are staggering home. World War II means a blackout in the English port town of Werrymouth, but the locals have no trouble finding their way over the Halfpenny Bridge, where a small toll shaves a mile off their drunken walk. A group of them are about to cross when a ship comes into the channel, and the lighthouse snaps on to guide its way. As the beams rake across the harbor, the sailors see two men struggling by the shore. One overpowers the other, killing him in the surf.

"The murderer escapes, and Detective-Inspector Littlejohn ventures down from London to find him. Two more murders follow, bringing this centre of shipping to a halt just when England needs it most."

"In Caesar and Hussein, Patrick O'Brian's two debut novels appear in one volume for the first time, providing a revealing insight into the literary genius behind the Master and Commander series nearly 40 years later.

"Caesar was Patrick O'Brian's first novel, written when he was just fourteen, and is the enchanting, bloodthirsty story of a unique panda leopard – whose father was a giant panda, his mother a snow leopard. With the dry wit and unsentimental precision that O'Brian would come to be loved for, we see the tragedies of Caesar's childhood, his capture and taming, and finally his rise to fatherhood under the iron rule of human masters.

"Hussein was O'Brian's second novel, a glittering adventure about a young mahout — or elephant handler — and his life among the elephants. An exotic story of love, murder, vengeance, snake-charming, sword-fighting, spying, stealing and triumph set against the evocative bazaars and temples of India at the height of the British Raj, Hussein was compared favourably by the New York Times to Kipling's Kim, calling it 'a gorgeous entertainment'."

My Life and Rugby, by Eddie Jones

"Eddie Jones is one of the most experienced and decorated coaches in world rugby. His career has spanned four World Cups: from the 2003 final, working with South Africa when they won in 2007, and causing the greatest upset in the history of the game in 2015 when he masterminded the Japanese victory over South Africa. Most recently, he led England on their incredible run at the 2019 World Cup, culminating in a stunning victory against the All Blacks before falling to South Africa in the final.

"Since taking over as head coach of England in 2015, Eddie Jones has orchestrated a complete revival of the national team. He has won the Six Nations Championship back-to-back, including England's first Grand Slam in a generation and their first-ever whitewash of Australia in their own backyard, as well as taking them on their longest-ever winning streak, matching the world record held by the All Blacks.

"Learning from the extreme highs and lows of his own playing career – including the numerous successes playing for Randwick and New South Wales but also the painful disappointment of never playing for Australia – he shows what it takes to be the best in the world and how everything he has learned about the game, both on and off the pitch, has gone into plotting England's route to the top of world rugby."

"At eighteen, Alexandra Wickham is presented to King George V and Queen Mary. She is a stunning beauty who seems destined for a privileged life. But fate, a world war and her own quietly rebellious nature lead her down a different path.

"By 1939, Britain is at war. From her home in idyllic Hampshire Alex makes her way to London as a nursing volunteer. But her fluency in French and German draws the attention of another, more secret, branch of the service.

"Within a year, Alex is immersed in a new world, shocking her family in trousers and bright red lipstick. But she is forbidden to tell anyone about her work, not even the pilot she falls in love with. While her country and those dearest to her pay the terrible price of war, Alex learns the art of espionage, leading to life-and-death missions and a long career in exotic places and historic times.

"Spy follows Alex's extraordinary adventures during the war, and afterwards all over the world, when her husband, Richard, enters the foreign service. She lives life on the edge, with a secret she must always keep hidden."