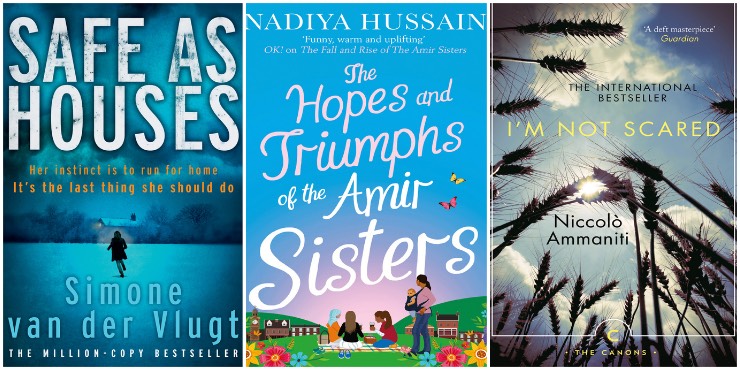 We're always adding great titles to our eLibrary. We've listed some of our favourite new eBooks on OverDrive for February to help you choose your next digital read.

The Move, by Felicity Everett

"Can you paint over the cracks in a marriage?

"Karen has packed up her life and is making The Move. She's on her way to the idyllic country cottage which her husband has painstakingly renovated for her. They're escaping the London bustle and the daily grind. And they're escaping their past. A fresh start in a beautiful, peaceful village. It will be different here, right?

"But something is awry. The landscape, breathtaking by day, is eerie by night. The longed-for peace and solitude is stifling. And the house, so artfully put together by her husband, has a strange vibe. Now that Karen is cut off from her old friends and family, she can't help wondering if her husband has plans of his own, and that history might be repeating itself."

"On paper, Merina Wilde has it all: a successful career writing the kind of romantic novels that make even the hardest hearts swoon, a perfect carousel of book launches and parties to keep her social life buzzing, and a childhood sweetheart who thinks she's a goddess. But Merry has a secret: the magic has stopped flowing from her fingers. Try as she might, she can't summon up the sparkle that makes her stories shine. And as her deadline whooshes by, her personal life falls apart too. Alex tells her he wants something other than the future she'd always imagined for them and Merry finds herself single for the first time since – well, ever.

"Desperate to get her life back on track, Merry leaves London and escapes to the windswept Orkney Islands, locking herself away in a secluded clifftop cottage to try to heal her heart and rediscover her passion for writing. But can the beauty of the islands and the kindness of strangers help Merry to fool herself into believing in love again, if only long enough to finish her book? Or is it time for her to give up the career she's always adored and find something new to set her soul alight?"

The Liar's Daughter, by Claire Allan

"No one deserves to be taken before their time. Do they?

"Joe McKee – pillar of the Derry community – is dead. As arrangements are made for the traditional Irish wake, friends and family are left reeling at how cancer could have taken this much-loved man so soon. But grief is the last thing that Joe's daughter Ciara and step-daughter Heidi feel. For they knew the real Joe – the man who was supposed to protect them and did anything but.

"As the mourners gather, the police do too, with doubt being cast over whether Joe's death was due to natural causes. Because the lies that Joe told won't be taken to the grave after all – and the truth gives his daughters the best possible motive for killing him..."

"Innocence is no protection against evil...

"One early October afternoon, ten-year-old Jacob Rossi begins the short walk home from school. But he never makes it. Days later, DCI Anna Tate is called to the scene of a burning building, where an awful discovery has been made. A body has been found, and the label in his school blazer reads: J. Rossi.

"As Anna starts digging, she soon learns that a lot of people had grudges against the boy's father. But would any of them go so far as to take his son? And is the boy's abductor closer than she thinks?"

"The world is changing beyond recognition. Radical extremists are rising and seek to enforce their ideology globally. Governments, the military and intelligence agencies are being outmanoeuvred at every step. Borders are breaking down. Those in power are puppets. The old rules are obsolete. To fight this war a new doctrine is needed.

"In a world where nothing is at it seems, where trust is gone, one man will make the difference. Meet Ex-MI6 agent and man in exile, Scott Pearce. It's time to burn the espionage rule book. Watch Pearce light the fire."

The Hopes and Triumphs of the Amir Sisters, by Nadiya Hussain

"Mae has watched as her three older sisters have gone through the process of finding their place in the world and faced the challenges of parenthood head on. Now ready to spread her wings beyond her close-knit family, Mae is ready to take the world by storm. But a series of events will shake the strong self-belief Mae has always had in herself and will leave her questioning where it is she really fits in.

"The Amir sisters will need to draw on all the love they have for each other, if they are going to navigate the challenges life has to throw at them and help Mae along the path to self-discovery."

"Southern Italy, 1978. In the midst of a relentlessly hot summer, as the adults stay inside tending to their own business, six children explore the scorched wheat fields that enclose their tiny Italian village. When the gang find a dilapidated farmhouse, nine-year-old Michele Amitrano makes a discovery so momentous that he doesn't dare tell a soul. It is a secret that Michele doesn't fully understand, yet it will force him to question everything and everyone around him, and will bring his innocent world toppling down."

The Apple, by Michael Faber

"Michel Faber's tale of love and lust in the Victorian era, The Crimson Petal and the White, was hailed as "a Dickensian novel for our times." In The Apple, Faber returns to Silver Street to find it still teeming with life, and conjures further tantalising glimpses of Sugar, Clara, William, Mr. Bodley and many other favourites."

"A single mother stands in the garden of her isolated house, hanging out the washing, when suddenly a man appears. When he grabs at her, Lisa runs, but she is not quick enough.

"Suddenly Lisa and her young daughter find themselves held hostage in their own home. In the following hours and days, Lisa will do the unimaginable to protect her child - all the time wondering why the only witness has not come back to help her..."

Being Emily, by Anne Donovan

"Things are never dull in the O’Connell family. Still, Fiona, squeezed between her quiet brother and her mischievous line-dancing twin sisters, thinks life in their tenement flat is far less interesting than Emily Brontë’s.

"But tragedy is not confined to Victorian novels. And life for Fiona in this happy domestic setup is about to change forever. Following the devastating events of a single day, her family can never be the same. But perhaps, new relationships will develop - built on a solid foundation of love.

"Moving, funny and ultimately heart-warming, Being Emily is a wonderful novel about one young girl trying to find her place in the world amid the turmoil that only your own family can create."