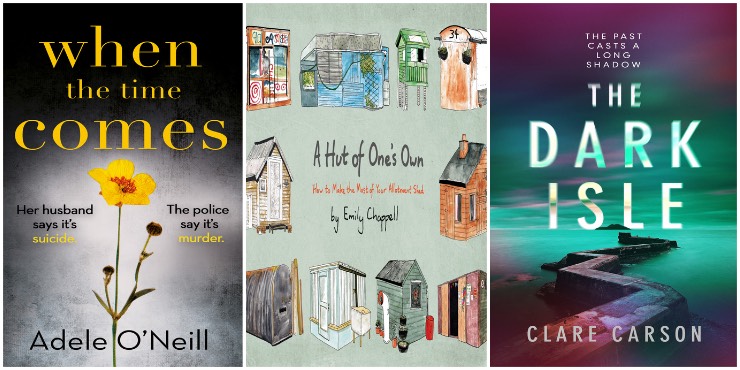 We're always adding great titles to our eLibrary. We've listed some of our favourite new eBooks on OverDrive for December to help you choose your next digital read.

The Pact, by Amy Heydenrich

"What if a prank leads to murder?

"When Freya arrives at her dream job with the city's hottest start-up, she can't wait to begin a new and exciting life, including dating her new colleague Jay. However, Nicole, Jay's ex and fellow employee, seems intent on making her life a misery. After a big deadline, where Nicole continually picks on her, Freya snaps and tells Jay about the bullying and together they concoct a revenge prank. The next morning, Nicole is found dead in her apartment...

"Is this just a prank gone wrong? Or does Freya know someone who is capable of murder - and could she be next?"

When the Time Comes, by Adele O'Neill

"Liam Buckley was a married man with two teenage children when he moved out of the family home to start a new life with his lover. His wife Jennifer never forgave him, but now she needs him to come back: she's been diagnosed with a terminal illness, and the kids can't cope alone.

"One day after Liam moves home, Jennifer is found dead. Liam thinks it's suicide. But the police, led by DS Louise Kennedy, are convinced it's murder.

"Liam hires a retired detective to help prove his innocence, but it's no easy task. The children are distraught, and Jennifer's best friend, Sarah, is waging a campaign against Liam, determined to expose him for a liar and a cheat.

"As secrets surface from the complex web of Buckley family life, DS Kennedy must decide. Did Jennifer Buckley end her own life, or did Liam take it from her? The answer, when it comes, will shock them all..."

"When a homeless man is found strangled to death, Detective Sergeant Geraldine Steel is caught off guard by the cold-blooded nature of the crime. A second murder suggests the existence of a killer whose motive is as elusive as he is dangerous.

"In an investigation plagued by police scepticism, only Geraldine is relentless in her pursuit of the truth. As she is forced down unexpected avenues into the lives of three people caught in a toxic triangle of love and deceit, she discovers there is more to this case than any of them could have imagined."

Day of the Dead, by Mark Roberts

"The man who calls himself Vindici broke out of prison last year. Now he's filmed himself torturing and killing paedophiles in Liverpool's affluent suburbs.

"Half the city are celebrating: the streets are now safer for their children. But for DCI Eve Clay and her team at the Merseyside Police, it's a nightmare. Their job is to solve crimes and lock up the killer – hard enough without being despised by the public they are trying to protect.

"And now, just when they think they've cracked the case, they receive a photo of Vindici at a Day of The Dead parade in Mexico. If Vindici is 5,000 miles away, who are they hunting in Liverpool? DCI Eve Clay must draw on all her cunning to unmask a killer who is somehow always one step ahead."

The Dark Isle, by Clare Carson

"Sam grew up in the shadow of the secret state. Her father was an undercover agent, full of tall stories about tradecraft and traitors. Then he died, killed in the line of duty.

"Now Sam has travelled to Hoy, in Orkney, to piece together the puzzle of her father's past. Haunted by echoes of childhood holidays, Sam is sure the truth lies buried here, somewhere.

"What she finds is a tiny island of dramatic skies, swooping birds, rugged sea stacks and just four hundred people. An island remote enough to shelter someone who doesn't want to be found. An island small enough to keep a secret..."

Killer of Kings, by Matthew Harffy

"Beobrand has land, men and riches. He should be content. And yet he cannot find peace until his enemies are food for the ravens. But before Beobrand can embark on his bloodfeud, King Oswald orders him southward, to escort holy men bearing sacred relics.

"When Penda of Mercia marches a warhost into the southern kingdoms, Beobrand and his men are thrown into the midst of the conflict. Beobrand soon finds himself fighting for his life and his honour.

"In the chaos that grips the south, dark secrets are exposed, bringing into question much that Beobrand had believed true. Can he unearth the answers and exact the vengeance he craves? Or will the blood-price prove too high, even for a warrior of his battle-fame and skill?"

A Hut of One's Own: how to make the most of your allotment shed, by Emily Chappell

"Allotments are places to grow food – but they are so much more than that. They are also places that encourage spontaneity, exploration, learning, sharing, restful activity and camaraderie. This book is a celebration of the allotment hut and the wonderful invention and resourcefulness that makes each one unique. The original illustrations offer inspiration for how to create your own, very special shed."