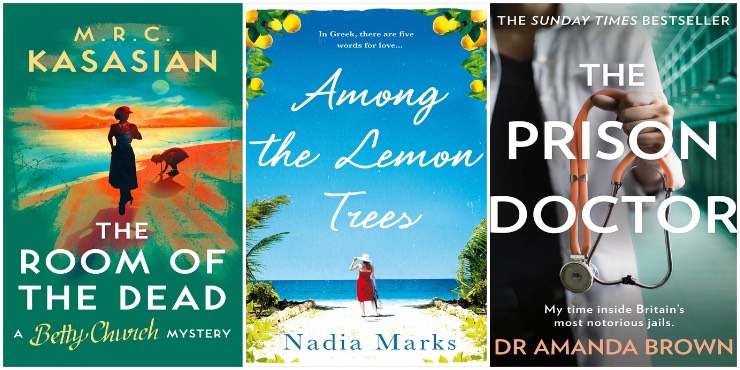 We're always adding great titles to our eLibrary. We've listed some of our favourite new eBooks on OverDrive for August to help you choose your next digital read.

City of Girls, by Elizabeth Gilbert

"It is the summer of 1940. 19-year-old Vivian Morris arrives in New York with her suitcase and sewing machine, exiled by her despairing parents. Although her quicksilver talents with a needle and commitment to mastering the perfect hair roll have been deemed insufficient for her to pass into her sophomore year of Vassar, she soon finds gainful employment as the self-appointed seamstress at the Lily Playhouse, her unconventional Aunt Peg's charmingly disreputable Manhattan revue theatre. There, Vivian quickly becomes the toast of the showgirls, transforming the trash and tinsel only fit for the cheap seats into creations for goddesses.

"Exile in New York is no exile at all: here in this strange wartime city of girls, Vivian and her girlfriends mean to drink the heady highball of life itself to the last drop."

The Prison Doctor: my time on the wards of Britain's most notorious jails, by Dr Amanda Brown

"Horrifying, heartbreaking and eye-opening, these are the stories, the patients and the cases that have characterised a career spent behind bars. These are the no-holds-barred memoirs of a GP who went from working at a quiet suburban practice to treating the country’s most dangerous criminals - first in young offenders’ institutions, then at the notorious Wormwood Scrubs and finally at Europe’s largest women-only prison in Europe, Bronzefield."

Chernobyl: History of a Tragedy, by Serhii Plokhy

"On the morning of 26 April 1986 Europe witnessed the worst nuclear disaster in history: the explosion of a reactor at the Chernobyl nuclear power plant in Soviet Ukraine. The outburst put the world on the brink of nuclear annihilation. In the end, less than five percent of the reactor's fuel escaped, but that was enough to contaminate over half of Europe with radioactive fallout.

"In Chernobyl, Serhii Plokhy recreates these events in all of their drama, telling the stories of the firefighters, scientists, engineers, workers, soldiers, and policemen who found themselves caught in a nuclear Armageddon and succeeded in doing the seemingly impossible: extinguishing the nuclear inferno and putting the reactor to sleep.

"While it is clear that the immediate cause of the accident was a turbine test gone wrong, Plokhy shows how the deeper roots of Chernobyl lay in the nature of the Soviet political system and the flaws of its nuclear industry. A little more than five years later, the Soviet Union would fall apart, destroyed from within by its unsustainable communist ideology and the dysfunctional managerial and economic systems laid bare in the wake of the disaster."

Adventures of the Yorkshire Shepherdess, by Amanda Owen

"Millions of viewers of Our Yorkshire Farm watched Amanda Owen, husband Clive and their nine children share their daily lives at Ravenseat, one of the most remote hill farms in the country. It’s a beautiful place, high in the Dales, and a rewarding existence close to nature. But Ravenseat is a tenant farm and may not stay in the family, so when Amanda saw a nearby farmhouse up for sale, she knew it was her chance to create roots for the next generation.

"The old house needed a lot of renovation and money was tight, so with her usual resourcefulness Amanda set about the work herself, with some help from a travelling monk, a visiting plumber and Clive. It’s fair to say things did not go according to plan."

"December, 1939. Having solved the case of the Suffolk Vampire, Inspector Betty Church and her colleagues at Sackwater Police Station have settled back down to business. There’s the elderly Mr Fern who keeps losing his slippers, Sylvia Satin’s thirteenth birthday party to attend and the scintillating case of the missing bookmark to solve. Though peace and quiet are all well and good, Betty soon finds herself longing for some cold-blooded murder.

"When a bomb is dropped on a residential street, both peace and quiet are broken and it seems the war has finally reached Sackwater. But Betty cannot stop the Hun, however hard she tries. So when the body of one of the bomb victims is found stretched out like an angel on Sackwater’s beach, Betty concentrates on finding the enemy much closer to home."

The Warlow Experiment, by Alix Nathan

"Herbert Powyss lives on a small estate in the Welsh Marches, with enough time and income to pursue a gentleman's fashionable cultivation of exotic plants and trees. But he longs to make his mark in the field of science. He hits on a radical experiment in isolation: for seven years a subject will inhabit three rooms in the cellar of the manor house, fitted out with books, paintings and even a chamber organ. Meals will arrive thrice daily via a dumbwaiter. The solitude will be totally unrelieved by any social contact; the subject will keep a diary of his daily thoughts and actions.

"Only one man is desperate enough to apply for the job: John Warlow, a semi-literate labourer with a wife and six children to provide for. The experiment, a classic Enlightenment exercise gone more than a little mad, will have unforeseen consequences for all included."

Among the Lemon Trees, by Nadia Marks

"Anna thought her marriage to Max would last forever. Having raised two happy children together, she looked forward to growing old with the man she loved. But when a revelation from her husband just before their wedding anniversary shakes her entire world, she's left uncertain of what the future holds.

"Needing time to herself, Anna takes up an offer from her widowed father to spend the summer on the small Aegean island of his birth, unaware that a chance discovery of letters in her aunt's house will unleash a host of family secrets. Kept hidden for sixty years, they reveal a tumultuous family history, beginning in Greece at the beginning of the twentieth century and ending in Naples at the close of the Second World War.

"Confronted by their family's long-buried truths, both father and daughter are shaken by the discovery and Anna begins to realize that if she is to ever heal the present, she must first understand the past..."