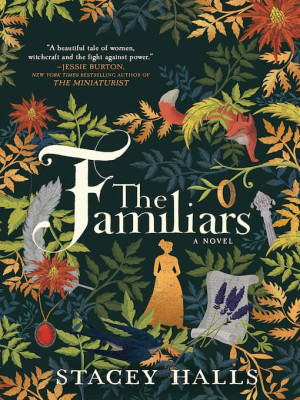 The Borrowers Book Group at Kesgrave Library share their thoughts on The Familiars, the debut novel written by Lancashire author Stacey Halls.

Fleetwood Shuttleworth is 17 years old, married, and pregnant for the fourth time. But as the mistress at Gawthorpe Hall, she still has no living child, and her husband Richard is anxious for an heir. When Fleetwood finds a letter she isn't supposed to read from the doctor who delivered her third stillbirth, she is dealt the crushing blow that she will not survive another pregnancy.

Then she crosses paths by chance with Alice Gray, a young midwife. Alice promises to help her give birth to a healthy baby, and to prove the physician wrong. As Alice is drawn into the witchcraft accusations that are sweeping the North-West, Fleetwood risks everything by trying to help her. But is there more to Alice than meets the eye?

Borrow a copy of The Familiars on our catalogue →

This is an enjoyable and rather different story for a Book Group. It is set in 1612 in the County of Lancaster (now Lancashire), and uses the true story of the Pendle Witch Trials at its core. This is the first book written by the author and is based on facts as recorded at the time as well as real characters and places but the story is fiction.

Rather than building and developing the characters, the book is driven by the story. Although the main female character, Fleetwood, was feisty and independently-minded, the emotion in her relationships with her husband and Alice Gray lacked depth. However the visits to the jail were descriptive, moving and convincing.

Our discussion of the book covered a range of issues: the expectations of an arranged marriage and stress to produce an heir; attitudes to women and their filial duty, both then and now; male persecution of women and witchcraft.

Love books? Want to discuss them in a reading group? Find out how to get started →