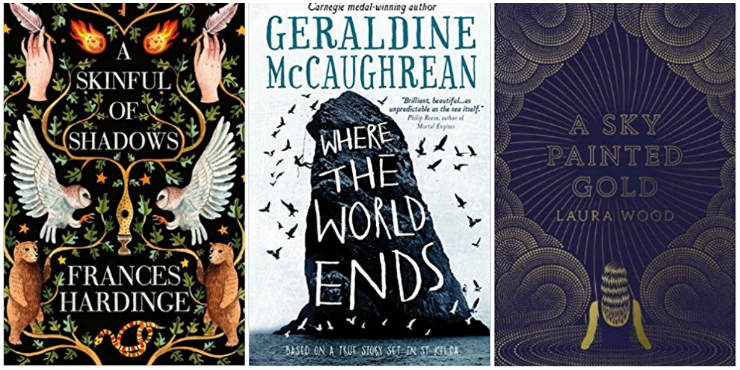 The Books Are My Bag Readers Awards are curated by bookshops and voted for by book lovers. Young book lovers are invited to vote for their favourite for the chance to win a £100 book token, so why not check out the YA shortlist today?

Children of Blood and Bone, by Tomi Adeyemi

"Zélie Adebola remembers when the soil of Orïsha hummed with magic. Burners ignited flames, Tiders beckoned waves, and Zélie’s Reaper mother summoned forth souls. But everything changed the night magic disappeared. Under the orders of a ruthless king, maji were targeted and killed, leaving Zélie without a mother and her people without hope.

"Now Zélie has one chance to bring back magic and strike against the monarchy. With the help of a rogue princess, Zélie must outwit and outrun the crown prince, who is hell-bent on eradicating magic for good."

Read Emily's review of Children of Blood and Bone →

The Book of Dust volume one: La Belle Sauvage, by Philip Pullman

"Philip Pullman returns to the world of 'His Dark Materials' with this novel, set ten years before 'Northern Lights' and featuring his much-loved character, Lyra Belacqua."

Read Emma's review of The Book of Dust volume one: La Belle Sauvage →

A Skinful of Shadows, by Frances Hardinge

"When a creature dies, its spirit can go looking for somewhere to hide. Some people have space inside them, perfect for hiding.

"Makepeace, a courageous girl with a mysterious past, defends herself nightly from the ghosts which try to possess her. Then a dreadful event causes her to drop her guard for a moment. And now there's a ghost inside her.

"The spirit is wild, brutish and strong, but it may be her only defence in a time of dark suspicion and fear. As the English Civil War erupts, Makepeace must decide which is worse: possession - or death."

Where the World Ends, by Geraldine McCaughrean

"In the summer of 1723, 8 boys and 3 men were marooned on a rocky stack in the middle of the sea at the edge of the Outer Hebrides. This book tells the story of how they survived nine months of deadly storms, madness and starvation with only a few ropes and baskets, and their own fortitude and endurance to save them."

"Growing up in her sleepy Cornish village dreaming of being a writer, 16-year-old Lou has always wondered about the grand Cardew house which has stood empty for years. And when the owners arrive for the summer - a handsome, dashing brother and sister - Lou is quite swept off her feet and into a world of moonlit cocktail parties and glamour beyond her wildest dreams. But, as she grows closer to the Cardews, is she abandoning her own ambitions - and is there something darker lurking at the heart of the Cardew family?"

"Bennett’s Bookshop has always been a haven for sixteen-year-old Paige Turner. It’s a place where she can escape from her sleepy hometown, hang out with her best friend, Holly, and also earn some money.

"But, like so many bookshops, Bennett’s has become a ‘casualty of the high street’ - it’s strapped for cash and going to be torn down. Paige is determined to save it but mobilising a small town like Greysworth is no mean feat. Time is ticking - but that’s not the only problem Paige has. How is she going to fend off the attractions of beautiful fellow artist, Blaine? And, more importantly, will his anarchist ways make or break her bookshop campaign?"