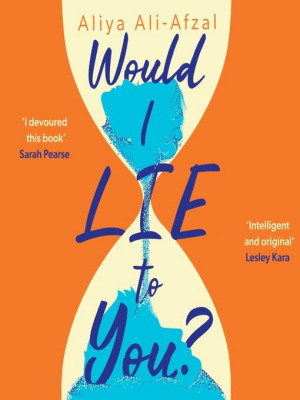 After serving a lengthy sentence for the murder of her husband, Dolly Rawlins is free from prison. And she's only got one thing on her mind: the diamonds she stashed before the police caught her.

But there are people waiting for Dolly on the outside ­- tough ex-prisoners who know about the diamonds, and they all want a cut.

Also waiting for Dolly is DS Mike Withey. He holds her personally responsible for the death of his sister in the diamond raid ten years earlier. And he wants her back inside.

Dolly Rawlins has other plans. But can she realise the dream that kept her going all those years in prison and avoid those who are after her?

Listen to She's out →

She says he's perfect. I know he's lying. He caught me watching, and our eyes met. That was when it hit me. There was something not quite right about my daughter's new boyfriend.

Ed finally meets his daughter's boyfriend for the first time. Smart, successful and handsome, Ryan appears to be a real catch. Then Abbie announces their plan to get married.

There's just one problem. Ed thinks Ryan is lying to them.

Who would you believe?

All of Ed's instincts tell him his daughter is in terrible danger - but no-one else can see it. With the wedding date approaching fast, Ed sets out to uncover Ryan's secrets, before it's too late.

Listen to The catch →

Faiza has always wanted to fit in. With her banker husband, three beautiful children and gorgeous house in a sought-after corner of London, but behind the expensive clothes, make-up and furniture lies a big secret. Faiza has been dipping into the family savings account in her attempt to belong, promising herself that one day she'll put the money back. Now Faiza has six weeks to put it all back before her husband or her friends notice she is penniless. And as the clock ticks down, a different Faiza emerges: one who will learn things about her family, her identity, her hopes and desires that she never knew before.

Listen to Would I lie to you? →

An indispensable guide to the craft of writing and business of publishing from one of our bestselling and most versatile authors. One-time teacher and bestselling novelist Joanne Harris has been advising and corresponding with aspirational writers for over six years. This collection of pithy and funny lists of advice provides both hard-won wisdom and insider industry help. All aspects of the writing process and story development are covered - as is the thorny issue of how and where to find readers. From Workspaces and Habits to Plot and Dialogue, these are motivating, problem-solving lists from an experienced and widely respected writer.

Uniquely, Ten Things About Writing also takes the reader beyond the stage of finished manuscripts and editorial changes - into the territories of rights, publicity and marketing. Whether you have the urge to write crime fiction or a fantasy novel, literary short stories or blockbuster thrillers Joanne's lists will speak to you.

Listen to Ten things about writing →

Saskia and Jenny are twins, alike in appearance only: Saskia has a single-minded focus on her studies, while Jenny is glamorous, thrill-seeking and capricious. Still, when Jenny is severely injured in an accident, Saskia puts her life on hold for her sister. Sara and Mattie are sisters with another difficult dynamic: Mattie needs almost full-time care, while Sara loves nothing more than fine wines, perfumes and expensive clothing, and leaves home at the first opportunity. But when their mother dies, Sara must move Mattie in with her. Gradually, Sara and Saskia learn that both their sisters' lives, and indeed their own, have been altered by the devastating actions of one man...

In turns razor-sharp, provocative and precise, Consent is a blistering novel of sisters and their knotty relationships, of predatory men and sexual power, of retribution and the thrilling possibilities of revenge.