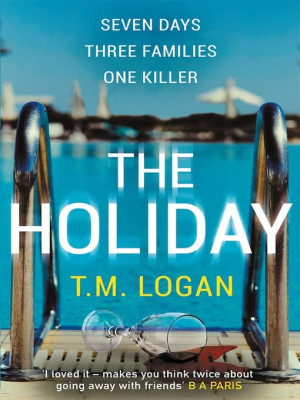 The Holiday, by T.M. Logan

It was supposed to be the perfect holiday, dreamed up by Kate as the ideal way to turn 40: four best friends and their husbands and children in a luxurious villa under the blazing sunshine of Languedoc-Roussillon.

But there is trouble in paradise. Kate suspects that her husband is having an affair, and that the other woman is one of her best friends.

One of these women is willing to sacrifice years of friendship and destroy her family. But which one? As Kate closes in on the truth in the stifling Mediterranean heat, she realises too late that the stakes are far higher than she ever imagined.

Because someone in the villa is prepared to kill to keep their secret hidden.

This is Going to Hurt, by Adam Kay

Welcome to the life of a junior doctor.

Scribbled in secret after endless days, sleepless nights and missed weekends, comedian and former junior doctor Adam Kay’s This Is Going to Hurt provides a no-holds-barred account of his time on the NHS front line. Hilarious, horrifying and heartbreaking by turns, these diaries are everything you wanted to know – and more than a few things you didn't – about life on and off the hospital ward. And yes, it may leave a scar.

Borrow This is Going to Hurt →

'How did it end up like this? Twenty-seven, unemployed, mistaken for a drug addict, in a treatment centre in the back arse of nowhere with an empty Valium bottle in my knickers...'

Meet Rachel Walsh. She's been living it up in New York City, spending her nights talking her way into glamorous parties before heading home in the early hours to her hot boyfriend Luke. But her sensible older sister showing up and sending her off to actual rehab wasn't quite part of her plan. She's only agreed to her incarceration because she's heard that rehab is wall-to-wall jacuzzis, gymnasiums and rock stars going cold turkey - plus it's about time she had a holiday. Saying goodbye to fun will be hard. But not as hard as losing the man who she realises, all too late, might just be the love of her life...

The Butler, by Danielle Steel

Joachim von Hartmann is born into a wealthy Argentine banking family and spends his early years in Buenos Aires. Blonde-haired and blue-eyed, he has inherited the looks of his German ancestors, while his twin brother Javier could not be more different. Following the death of their father, and when details emerge about Joachim's maternal grandfather's wartime activity, both boys and their mother, Liese, are cast out from the family. After the years of glamour and luxury, she must raise them alone with no financial support. Eventually Liese meets and falls in love with a French art expert, and she and Joachim move to Paris without Javier, who refuses to leave his beloved Argentina.

Rumours soon start to circulate that he's involved in the drugs trade. Following a whim, Joachim moves to England to train as a butler and discovers that he loves his role working for the aristocracy on their fine estates. On the death of his last employer, Joachim decides to move back to France to spend some time with his mother. He finds that there's no call for butlers in Paris, but he does find a job putting his skills to good use acting as assistant and confidant to Olivia, an American who needed to escape her life in New York. Both Joachim and Olivia hold secrets about their past, and as reports come through that Javier's life in the Columbian underworld is spiralling out of control, they must, as brave and honourable people, make some difficult decisions.

What they come to understand is that destiny has a hand in their future and everything that came before had a reason. She had come to Paris to find him. The future would unfold as it was meant to and they would face it together.