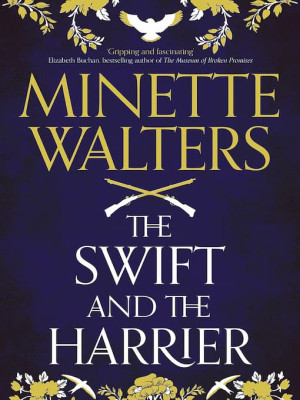 The Boy From the Woods, by Harlan Coben

Lies are dangerous. But the truth could kill him.

His name is Wilde. Thirty years ago he was found in the New Jersey backwoods with no idea of how he’d got there or what had happened to his family.

Now a decorated former soldier, he still prefers to live outdoors, alone. But when a local girl goes missing, Wilde is asked to use his unique skills to find her.

To do so he must return to a community where he has never fitted in, where the powerful are protected even when they are keeping secrets. Dangerous secrets that can kill. And which Wilde must expose before it’s too late...

Borrow The Boy From the Woods →

The Black Book, by James Patterson

How can you prove your innocence when you can't remember the crime?

Being a cop runs in Billy Harney's family. The son of Chicago's Chief of Detectives whose twin sister, Patty, also followed in their father's footsteps, there's nothing Billy won't give up for the job, including his life.

Left for dead alongside his tempestuous former partner and a hard-charging assistant district attorney out for blood, Billy miraculously survives. But he remembers nothing about the events leading up to the shootout.

Charged with double murder and desperate to clear his name, Billy retraces his steps to get to the bottom of what happened. When he discovers the existence of a little black book that everyone who's anyone in Chicago will stop at nothing to get their hands on, Billy suspects it contains the truth that will either set him free ... or confirm his worst fears.

The Swift and the Harrier, by Minette Walters

Dorset, 1642. When bloody civil war breaks out between the King and Parliament, families and communities across England are riven by different allegiances. A rare few choose neutrality. One such is Jayne Swift, a Dorset physician from a Royalist family, who offers her services to both sides in the conflict.

Through her dedication to treating the sick and wounded, regardless of belief, Jayne becomes a witness to the brutality of war and the devastation it wreaks. Yet her recurring companion at every event is a man she should despise because he embraces civil war as the means to an end. She knows him as William Harrier, but is ignorant about every other aspect of his life. His past is a mystery and his future uncertain.

Borrow The Swift and the Harrier →

Victor and Eli started out as college roommates—brilliant, arrogant, lonely boys who recognized the same sharpness and ambition in one another. A shared research interest in adrenaline, near-death-experiences, and seemingly supernatural events reveals an intriguing possibility: that under the right conditions, someone could develop extraordinary abilities. But when their thesis moves from the academic to the experimental, things go horribly wrong. They become EOs, ExtraOrdinaries, leaving a body in their wake and turning on each other.

Ten years later Victor has escaped from prison and is determined to get his revenge on the man who put him there, aided by a young girl with the ability to raise the dead. Eli has spent the years hunting down and killing every EO he can find, convinced that they are a crime against God, all except his sidekick, a woman whose power is persuasion and whom he cannot defy. Armed with terrible power on both sides, driven by the memory of betrayal and loss, the arch-nemeses have set a course for revenge—but who will be left alive at the end?

Chief of Staff, by Gavin Barwell

Once a more sedate affair, since 2016, British politics has witnessed a barrage of crises, resignations and general elections. As Brexit became logjammed, Theresa May's premiership was the most turbulent of all. In her darkest hour, following the disastrous 2017 election, she turned to Gavin Barwell to restore her battered authority. He would become her Chief of Staff for the next two years - a period punctuated by strained negotiations, domestic tragedy, and intense political drama.

In this gripping insider memoir, Barwell reveals what really went on in the corridors of power - and sheds a vital light on May, the most inscrutable of modern prime ministers. He was by her side when she negotiated her Brexit deal, met Donald Trump, heard about the poisoning of the Skripals in Salisbury, responded to the Grenfell Tower fire, met Jeremy Corbyn and Keir Starmer to broker a cross-party Brexit agreement - and ultimately made the decision to stand down as Prime Minister. Revealing how government operates during times of crisis, this will become the definitive record of a momentous episode in Britain's recent political history.

When editor Susan Ryeland is given the tattered manuscript of Alan Conway's latest novel, she has little idea it will change her life. She's worked with the revered crime writer for years and his detective, Atticus Pund, is renowned for solving crimes in the sleepy English villages of the 1950s. As Susan knows only too well, vintage crime sells handsomely. It's just a shame that it means dealing with an author like Alan Conway.

But Conway's latest tale of murder at Pye Hall is not quite what it seems.

Yes, there are dead bodies and a host of intriguing suspects, but hidden in the pages of the manuscript there lies another story: a tale written between the very words on the page, telling of real-life jealousy, greed, ruthless ambition and murder.