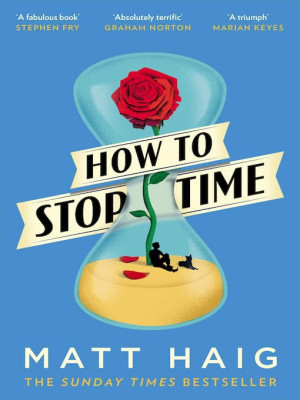 How to stop time, by Matt Haig

Tom Hazard has a dangerous secret. He may look like an ordinary 41-year-old, but owing to a rare condition, he's been alive for centuries. From Elizabethan England to Jazz-Age Paris, from New York to the South Seas, Tom has seen a lot, and now craves an ordinary life.

Always changing his identity to stay alive, Tom has the perfect cover - working as a history teacher at a London comprehensive. Here he can teach the kids about wars and witch hunts as if he'd never witnessed them first-hand. He can try to tame the past that is fast catching up with him. The only thing Tom must not do is fall in love.

Borrow How to stop time →

In a peaceful retirement village, four unlikely friends meet up once a week to investigate unsolved murders. But when a brutal killing takes place on their very doorstep, The Thursday Murder Club find themselves in the middle of their first live case.

The four friends, Elizabeth, Joyce, Ibrahim and Ron, might be pushing 80 but they still have a few tricks up their sleeves. Can our unorthodox but brilliant gang catch the killer before it's too late?

You think you know a person... Ariel Price wakes up in Lisbon, alone. Her husband is gone – no warning, no note, not answering his phone. Something is wrong. She starts with hotel security, then the police, then the American embassy, at each confronting questions she can't fully answer: What exactly is John doing in Lisbon? Why would he drag her along on his business trip? Who would want to harm him? And why does Ariel know so little about her new, much younger, husband?

The clock is ticking. Ariel is increasingly frustrated and desperate, running out of time, and the one person in the world who can help is the one person she least wants to ask.

Some of the characters in Stewkey Blues have lived in Norfolk all their lives. Others are short-term residents or passage migrants. Whether young or old, self-confident or ground-down, local or blow-in, all of them are reaching uneasy compromises with the world they inhabit and the landscape in which that life takes place.

The shadow glass, by Josh Winning

Jack Corman is failing at life. Jobless, jaded and on the "wrong" side of thirty, he's facing the threat of eviction from his London flat while reeling from the sudden death of his father, one-time film director Bob Corman. Back in the eighties, Bob poured his heart and soul into the creation of his 1986 puppet fantasy The Shadow Glass, a film Jack loved as a child, idolising its fox-like hero Dune. But The Shadow Glass flopped on release, deemed too scary for kids and too weird for adults, and Bob became a laughing stock, losing himself to booze and self-pity.

Tipped into a desperate real-world quest to save London from the more nefarious of his father's creations, Jack teams up with excitable fanboy Toby and spiky studio executive Amelia to navigate the labyrinth of his father's legacy while conjuring the hero within - and igniting a Shadow Glass resurgence that could, finally, do his father proud.