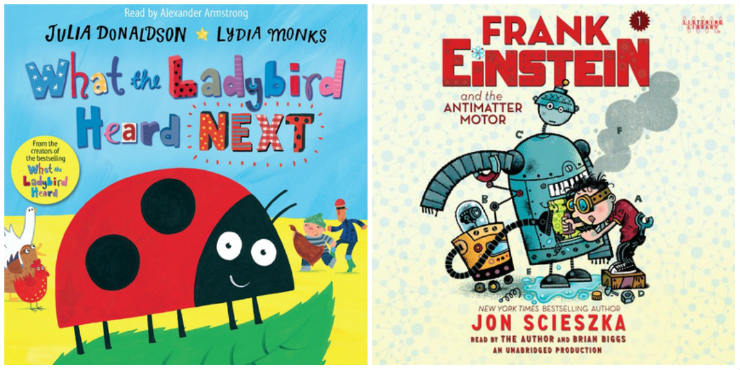 Did you know that audiobooks count towards the Summer Reading Challenge? We've picked out the best new CD and digital audiobooks for children.

"Stick Dog and his furry friends, Mutt, Stripes, Karen and Poo-Poo are back in another adventure! Everyone's favourite cartoon canines are hungry again - and this time it's pizza that has their mouths watering. But when it's pizza on the go - can they chase it down?"

The Bolds to the Rescue, written & read by Julian Clary

"The Bolds are a family of hyenas living as humans in a suburban house. But now their kindness to animal waifs and strays has become legendary, and more and more animals keep turning up to stay! Roger the sheep flocks to their house, and Fifi the poodle turns up to learn some new tricks, whilst Sheila the crocodile decides to stay for a while.

"But when the Bolds take in a couple of race horses who are on the run, they worry their animal magnetism is getting to be too much. Have these hyenas bitten off more than they can chew?"

"Effie Truelove has made a promise to keep her grandfather's magical books safe from danger. Whatever it takes. But it's not always easy when you're a pupil at the Tusitala School for the Gifted, Troubled and Strange.

"Together with her new schoolfriends, Maximilian, Wolf, Lexy, and Raven, Effie must travel to the mysterious Otherworld and brave the terrifying Diberi, a secret organisation with plans that could destroy the entire universe."

"It's been 92 hours since Beaky last told a lie. So far he's survived two full days of school with only three light beatings, two telling-offs and one wedgie - but the annual school trip is going to take Beaky's survival skills to a whole other level - especially as a mix up in the school office means that Beaky and his class are on a trip to Learning Land, a rubbish theme park aimed at eight-year-olds. And home to cheery-but-creepy Clumso the Clued-up Clown whose job is to dish out fascinating facts to one and all.

"But there is worse to come when Beaky's partnered with Wayne, the school bully, who has a morbid fear of clowns. With Beaky unable to tell a lie and Wayne intent on beating him up, things aren't looking good. And that's before they find themselves on the run from a manic clown who'll seemingly stop at nothing to track them down."

Marge in Charge, written and read by Isla Fisher

"Jemima and Jake's new babysitter doesn't look too promising. In fact she looks very sensible, very old and very small (she only comes up to daddy's armpit!) But the moment her parents leave the house, Marge gives a mischievous wink, takes off her hat and reveals a marvellous mane of rainbow-coloured hair!"

The Wild Robot, by Peter Brown, read by Kate Atwater

"When robot Roz opens her eyes for the first time, she discovers that she is alone on a remote, wild island. Why is she there? Where did she come from? And, most important, how will she survive in her harsh surroundings?

"Roz's only hope is to learn from the island's hostile animal inhabitants. When she tries to care for an orphaned gosling, the other animals finally decide to help, and the island starts to feel like home. Until one day, the robot's mysterious past comes back to haunt her."

"Miles Murphy had it made. He lived in a great town near the ocean, he had two best friends, and most importantly, he had a reputation for being his town's best prankster. All of which explains why he's not happy to be moving to Yawnee Valley, a sleepy town that's famous for one thing and one thing only: cows. Worse than that, Miles quickly discovers that Yawnee Valley already has a prankster — and a great one. If Miles is going to take the title from this mystery kid, he'll have to raise his game.

"It's prankster against prankster in an epic war of trickery, until the two finally decide to join forces to pull off the biggest prank ever seen, a prank so huge it would make the members of the International Order of Disorder (a loose confederacy of pranksters that flourished a couple of centuries ago) proud."

"From its first publication in 1877, Black Beauty has been one of the best-loved animal stories ever written. The dramatic and heartwarming tale is told by the magnificent black horse himself, from his idyllic days on a country squire's estate to his harsh fate as a London cab horse and his merciful rescue by two kindly old ladies.

"Filled with vivid anecdotes about animal intelligence, the novel derives a special magic from the love of all creatures, great and small, apparent on every page. But the book's lasting impact comes from its descriptions of a human society struggling to find the goodness within itself and its plea for kindness to all creatures—a message so powerful that this favourite classic began a crusade for animal welfare that continues to this day."

The Explorer, by Katherine Rundell, read by Peter Noble

"After crashing hundreds of miles from civilisation in the Amazon rainforest, Fred, Con, Lila and Max are utterly alone and in grave danger. They have no food, no water and no chance of being rescued. But they are alive, and they have hope.

"As they negotiate the wild jungle, they begin to find signs that something - someone - has been there before them. Could there possibly be a way out after all?"

"Fourth graders George Beard and Harold Hutchins are a couple of class clowns. The only thing they enjoy more than playing practical jokes is creating their own comic books. And together they’ve created the greatest superhero in the history of their elementary school: Captain Underpants! His true identity is SO secret, even HE doesn’t know who he is!"

Into the Wild, by Erin Hunter, read by MacLeod Andrews

"For generations, four Clans of wild cats have shared the forest according to the laws laid down by their ancestors. But the warrior code is threatened, and the ThunderClan cats are in grave danger. The sinister ShadowClan grows stronger every day. Noble warriors are dying — and some deaths are more mysterious than others.

"In the midst of this turmoil appears an ordinary housecat named Rusty... who may turn out to be the bravest warrior of them all."

What the Ladybird Heard Next, by Julia Donaldson & Lydia Monks, read by Alexander Armstrong

"Join the cow, the goose, the horse, the sheep, the cat, and everyone's favourite ladybird in this fantastically funny farmyard caper - a much anticipated sequel to the hugely successful What the Ladybird Heard, which has sold over a million copies worldwide."

Return of the Mummy, by R. L. Stine, read by Kirby Heyborne

"After last year's scary adventure, Gabe's a little nervous about being back in Egypt. Back near the ancient pyramids. Back where he saw all those creepy mummies.

"Then he learns about an Egyptian superstition. A secret chant that is supposed to bring mummies back to life. Gabe's uncle says it's just a hoax.

"But now it sounds like something's moving in the mummy's tomb. No way a couple of dumb words can wake the dead.

Night of the Living Dummy, by R. L. Stine, read by Carol Schneider

"Discover the fan-favorite thriller and chiller that first introduced the world to the wooden face of fear. The puppet who pulls all the strings. None other than Slappy the Dummy!"

The Sue Hendra Collection, written and read by Sue Hendra

"Meet Barry, the fish with fingers, No-Bot, the robot with no bottom, and many more weird and wonderful characters in The Sue Hendra Collection! You will get lost in the colour and crazy worlds that the bestselling picture book author has created."

Pigsticks and Harold and the Incredible Journey, by Alex Milway, read by Stanley McGeagh

"When their last crumb of cake is stolen and it doesn't look like they'll ever make it home again, they finally find the Ends of the Earth – in the last place they'd ever think to look."

"There's a thief on the loose in Tuptown, and the annual Butterfly Ball will be cancelled unless someone is brought to justice. Luckily, Pigsticks has crime-fighting in his blood and a magnifying glass in his hand.

"Will Detective Pigsticks and his keen-eyed assistant Harold solve the crime? And can they do it in time to save the Butterfly Ball?"

Frank Einstein and the Antimatter Motor, by Jon Scieszka, read by the author and Brian Biggs

"Frank Einstein loves figuring out how the world works by creating household contraptions that are part science, part imagination, and definitely unusual.

"After an uneventful experiment in his garage-lab, a lightning storm and flash of electricity bring Frank’s inventions — the robots Klink and Klank — to life! Not exactly the ideal lab partners, the wisecracking Klink and the overly expressive Klank nonetheless help Frank attempt to perfect his Antimatter Motor... until Frank’s archnemesis, T. Edison, steals Klink and Klank for his evil doomsday plan!"

The Dare Game, by Jacqueline Wilson, read by Sandi Toksvig

"I'm Tracy Beaker, the Great Inventor of Extremely Outrageous Dares – and I dare YOU not to say this is the most brilliant story ever!

"I've bought a big fat purple notebook for writing down all my mega-manic ultra-scary stories in. But especially for my own story. Of how my foster-mum, Cam, has turned out to be a real meanie. No designer clothes, when I really need them. A pokey flat, and a horrible new school. No wonder I keep bunking off...

"Still, it will have to do until my real mum comes and gets me. And until then, no-one is going to be better at the Dare Game than me!"

Middle School: Get Me Out of Here!, by James Patterson & Chris Tebbetts, read by Bryan Kennedy

"After sixth grade, the very worst year of his life, Rafe Khatchadorian thinks he has it made in seventh grade. He's been accepted to art school in the big city and imagines a math-and-history-free fun zone. Wrong! It's more competitive than Rafe ever expected, and to score big in class, he needs to find a way to turn his boring life into the inspiration for a work of art. His method? Operation: Get a Life!

"Anything he's never done before, he's going to do it, from learning to play poker to going to a modern art museum. But when his newest mission uncovers secrets about the family Rafe's never known, he has to decide if he's ready to have his world turned upside down."