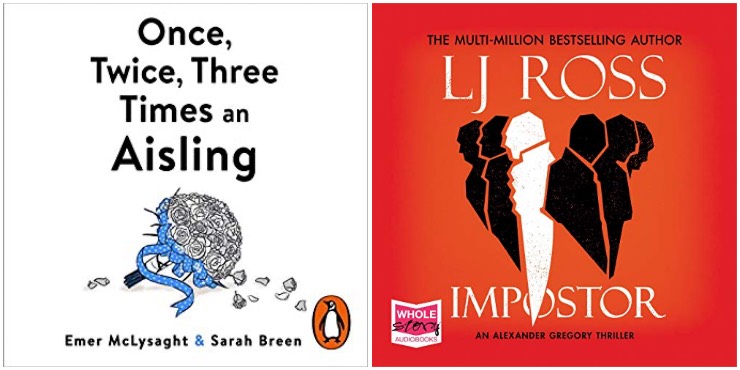 "Hallie Rubenhold traces the story of the Harris List, which detailed all the capital's prostitutes and gives a glimpse into the lives of those who lived and died by the List's profits during the Georgian era."

Talking to Strangers, written and read by Malcolm Gladwell

"With original archival interviews and musical scoring, this enhanced audiobook edition of Talking to Strangers brings Gladwell’s renowned storytelling to life in his unparalleled narrating style.

"The routine traffic stop that ends in tragedy. The spy who spends years undetected at the highest levels of the Pentagon. The false conviction of Amanda Knox. Why do we so often get other people wrong? Why is it so hard to detect a lie, read a face or judge a stranger’s motives?

"Through a series of encounters and misunderstandings - from history, psychology and infamous legal cases - Malcolm Gladwell takes us on an intellectual adventure into the darker side of human nature, where strangers are never simple and misreading them can have disastrous consequences."

Will, written and read by Will Self

"Will's mother's hokey homily - 'Waste not, want not' - hisses in his ears as he oscillates furiously on the spot, havering on the threshold between the bedroom and the dying one, all the while cradling the plastic leech of the syringe in the crook of his arm. Oscillating furiously, and, as he presses the plunger home a touch more - and more - he hears it again and again: 'Waaaste nooot, waaant nooot!', whooshing into and out of him, while the blackness wells up at the periphery of his vision, and his hackneyed heart begins to beat out weirdly arrhythmic drum fills - even hitting the occasional rim-shot on his resonating rib cage. He waits, paralysed, acutely conscious, that were he simply to press his thumb right home, it'll be a cartoonish death: That's all folks! as the aperture screws shut forever."

"This novel follows the blunt, contradictory yet deeply loveable Olive Kitteridge as she grows older, navigating the second half of her life as she comes to terms with the changes - sometimes welcome, sometimes not - in her own existence and in those around her.

"Olive adjusts to her new life with her second husband, challenges her estranged son and his family to accept him, experiences loss and loneliness, witnesses the triumphs and heartbreaks of her friends and neighbours in the small coastal town of Crosby, Maine - and, finally, opens herself to new lessons about life."

"Captured, abducted and married into Boko Haram, the narrator of this story witnesses and suffers the horrors of a community of men governed by a brutal code of violence. Barely more than a girl herself, she must soon learn how to survive as a woman with a child of her own. Just as the world around her seems entirely consumed by madness, bound for hell, she is offered an escape of sorts - but only into another landscape of trials and terrors amidst the unforgiving wilds of northeastern Nigeria, through the forest and beyond; a place where her traumas are met with the blinkered judgement of a society in denial.

"How do we love in a world that has lost its moorings? How can we comprehend the barbarism of our enemies, and learn forgiveness for atrocities committed in the name of ideology?"

"Daisy and Simon's marriage is great, isn't it? After years together, the arrival of longed-for daughter Millie sealed everything in place. A happy little family of three. And so what if Simon drinks a bit too much sometimes - Daisy's used to it, she knows he's letting off steam. Until one night at a party things spiral horribly out of control. And that happy little family of three will never be the same again."

All the Rage, by Cara Hunter, read by Lee Ingleby & Emma Cunniffe

"A teenage girl is found wandering the outskirts of Oxford, dazed and distressed. The story she tells is terrifying. Grabbed off the street, a plastic bag pulled over her face, then driven to an isolated location where she was subjected to what sounds like an assault. Yet she refuses to press charges.

"DI Fawley investigates, but there's little he can do without the girl's cooperation. Is she hiding something, and if so, what? And why does Fawley keep getting the feeling he's seen a case like this before?

"And then another girl disappears, and Adam no longer has a choice: he has to face up to his past.

"Because unless he does, this victim may not be coming back..."

"After an elite criminal profiling unit is shut down amid a storm of scandal and mismanagement, only one person emerges unscathed. Forensic psychiatrist, Doctor Alexander Gregory, has a reputation for being able to step inside the darkest minds to uncover whatever secrets lie hidden there and, soon enough, he finds himself drawn into the murky world of murder investigation.

"In the beautiful hills of County Mayo, Ireland, a killer is on the loose. Panic has a stranglehold on its rural community, and the Garda are running out of time. Gregory has sworn to follow a quiet life but, when the call comes, can he refuse to help their desperate search for justice?"

Sorry for the Dead, by Nicola Upson, read by Sandra Duncan

"In the summer of 1915, the sudden death of a young girl brings grief and notoriety to Charleston Farmhouse on the Sussex Downs.

"Years later, Josephine Tey returns to the same house - now much changed - and remembers the two women with whom she once lodged as a young teacher during the Great War. As past and present collide, with murders decades apart, Josephine is forced to face the possibility that the scandal which threatened to destroy those women's lives hid a much darker secret."

"Aisling is thirty, flirty and frazzled. But - just when she should finally be feeling all grown-up - she's floundering. Because when you're recovering from a broken heart as well as struggling to keep your café as sizzling as your award-winning sausages, it's hard to feel you've really made it as an adult. Which is just the moment for the unexpected to strike and complicate everything.

"Now is not the time for a delicious new man to show up, her best friend to demand the hen do of the century and a surprise celebrity appearance. But Aisling, never one to worry about having too much on her plate, rolls up her sleeves: she's got this. Until she discovers that being a proper grown-up means you can't do everything. Sometimes you will let someone down. But will it be those she loves, or herself?"