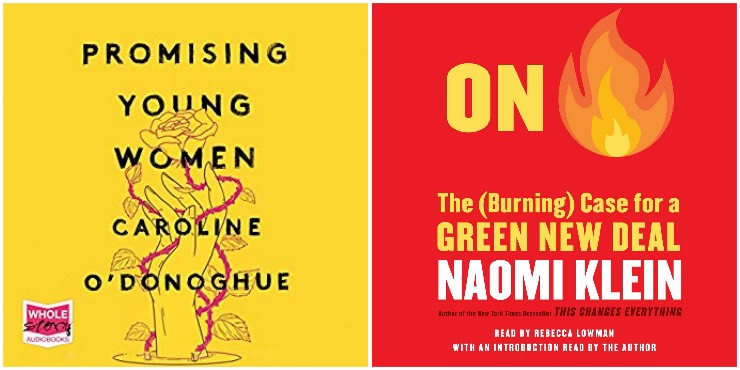 "In a nameless city, two ruthless rival criminal gangs, one Albanian, the other Ukrainian, are competing for control. But they hadn't counted on Jack Reacher arriving on their patch.

"Reacher is trained to notice things. He's on a Greyhound bus, watching an elderly man sleeping in his seat, with a fat envelope of cash hanging out of his pocket. Another passenger is watching too - obviously hoping to get rich quick. As the mugger makes his move, Reacher steps in. The old man is grateful, yet he turns down Reacher's offer to help him home. He's vulnerable, scared, and clearly in big, big trouble.

"What hold could the gangs possibly have on the old guy? Will Reacher sit back and let bad things happen? Or can he twist the situation to everyone's benefit?"

The Lying Room, by Nicci French, read by Olivia Poulet

"A trusted colleague and friend. A mother. A wife. Neve Connolly is all these things. She has also made mistakes; some small, some unconsciously done, some large, some deliberate. She is only human, after all.

"But now one mistake is spiralling out of control and Neve is bringing those around her into immense danger. She can’t tell the truth. So how far is she prepared to go to protect those she loves. And who does she really know? And who can she trust?

"A liar. A cheat. A threat. Neve Connolly is all these things. Could she be a murderer?"

Me, by Elton John, read by the author and Taron Egerton

"In his first and only official autobiography, music icon Elton John reveals the truth about his extraordinary life. The result is Me - the joyously funny, honest, and moving story of the most enduringly successful singer/songwriter of all time."

All Among the Barley, by Melissa Harrison, read by Helen Ayres

"The autumn of 1933 is the most beautiful Edie Mather can remember. In the fields and villages around her beloved Wych Farm, however, the Great War still casts a shadow over a community impoverished by economic depression and threatened by change. Change, too, is coming to Edie, who at fourteen must soon face the unsettling pressures of adulthood.

"Glamorous outsider Constance FitzAllen arrives from London to document fading rural traditions and beliefs, urging all who will listen to resist progress and return to the old ways - but some wonder whether there might be more to the older woman than meets the eye.

"As harvest approaches and the future of Wych Farm itself grows uncertain, Edie must somehow find a way to trust her instincts and save herself from disaster."

Grand Union: stories, by Zadie Smith, read by the author and Doc Brown

"Interweaving ten completely new and unpublished stories with some of her best-loved pieces from the New Yorker, and elsewhere, Zadie Smith, presents a dizzyingly rich and varied collection of fiction. Moving exhilaratingly across genres and perspectives, from the historic to the vividly current to the slyly dystopian, Grand Union is a sharply alert and prescient collection about time and place, identity and rebirth, the persistent legacies that haunt our present selves and the uncanny futures that rush up to meet us."

"Jane Peters is an adrift 20-something by day and a world-weary agony aunt by night. But when an office party goes too far, Jane dissolves into the high-stakes world of being the Other Woman: a role she has the right advice for, but not the smarts to follow through on.

"What starts out as a drunken mistake quickly unravels as Jane discovers that sex and power go hand in hand, and that it's hard to keep your head when you've become someone else's dirty little secret. And soon, her friendships, her sanity and even her life are put into jeopardy."

On Fire: the (burning) case for a green new deal, by Naomi Klein, read by Rebecca Lowman

"For more than twenty years, Naomi Klein has been the foremost chronicler of the economic war waged on both people and planet - and the champion of a sweeping environmental agenda with justice at its centre. Her books have defined our era.

"On Fire gathers for the first time more than a decade of her impassioned writing from the frontline of climate change, and pairs it with new material on the staggeringly high stakes of what we choose to do next. These essays, reports and lectures show Klein at her most prophetic and philosophical, investigating the climate crisis not only as a profound political challenge but also as a spiritual and imaginative one."

"Platform Seven at 4am: Peterborough Railway Station is deserted. The man crossing the covered walkway on this freezing November morning is confident he’s alone. As he sits on the metal bench at the far end of the platform it is clear his choice is strategic - he’s as far away from the night staff as he can get.

"What the man doesn’t realise is that he has company. Lisa Evans knows what he has decided. She knows what he is about to do as she tries and fails to stop him walking to the platform edge.

"Two deaths on Platform Seven. Two fatalities in eighteen months - surely they’re connected? No one is more desperate to understand what connects them than Lisa Evans herself. After all, she was the first of the two to die."

Who Am I, Again?, written and read by Lenny Henry

"In 1975, a gangly black 16-year-old from Dudley, decked out in floppy bow tie and Frank Spencer beret, appeared on our TV screens for the first time. So began the transformation from apprentice factory worker to future national treasure of Sir Lenny Henry.

"In his long-awaited autobiography, Lenny tells the extraordinary story of his early years and sudden rise to fame. Born soon after his Jamaican parents had arrived in the Midlands, Lenny was raised as one of seven siblings in a boisterous, hilarious, complicated working household, and sent out into the world with his mum's mantra of 'H'integration! H'integration! H'integration!' echoing in his ears.

"A natural ability to make people laugh came in handy. At school it helped subdue the daily racist bullying. In the park, it led to lifelong friendships and occasional snogs. Soon, it would put him on stage at working men's clubs and Black Country discotheques. And then an invitation to audition for ITV's New Faces would change his life for ever.

"But those first years of show business, in a 1970s Britain of questionable variety shows, endless seaside summer seasons, casual chauvinism and blatant racism, were a bewildering experience for a lone black teenager. At every stage, he wondered: 'Am I good enough? Is this what they want? Who am I, again?'"

"When Holly Kennedy is approached by a group calling themselves the PS, I Love You Club, her safe existence is turned on its head. Inspired by hearing about her late husband Gerry's letters, the club wants Holly to help them with their own parting messages for their loved ones to discover after they're gone.

"Holly is sure of one thing: no way is she being dragged back to the grief she has left behind. It's taken seven years to reinvent herself, and she's ready to move on with her life.

"But Holly comes to realise that when you love someone, there's always one more thing to say."