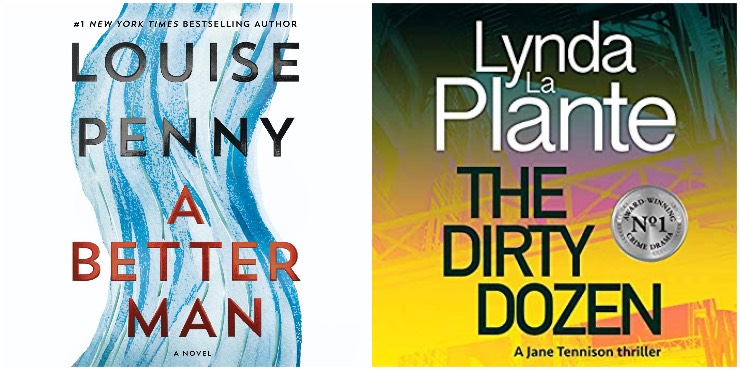 The Christmas Invitation, by Trisha Ashley, read by Emma Powell

"Meg is far from in the Christmas mood. She's never gone in for the tinsel, baubles and mistletoe of it all, and to top it off she's still getting over an illness. Yet when she's invited to spend the run up to Christmas in the snowy countryside, rather than dreary London, she can't say no.

"Arriving at a warm and cosy family home in a small hilltop village, Meg soon begins to wonder what a proper Christmas might be like. But just as she's beginning to settle in she spots a familiar face. Lex. Despite the festive cheer, Meg suddenly wants nothing more than to get as far away from him, and their past secrets, as she can. But if she stays, maybe this will be the year she finally discovers the magic of Christmas."

No Mercy, by Martina Cole, read by Annie Aldington

"Diana Davis has been head of the family business since the death of her husband, an infamous bank robber. She's a woman in a man's world, but no one messes with her. Her only son, Angus, is a natural born villain, but he needs to earn Diana's trust before she'll allow him into the business.

"Once he's proved he has the brains to run their clubs in Marbella, he is given what he's always wanted. It's the beginning of a reign of terror that knows no bounds. But Angus has a blind spot: his wife, Lorna, and their three kids, Angus Junior, Sean and Eilish. And as the next generation enters the business, Angus has a painful truth to learn. Even when it comes to family, he must show no mercy..."

A Better Man, by Louise Penny, read by Adam Sims

"The air is unbearably tense as Armand Gamache returns to the Sûreté du Québec for his first day of work since his demotion from its command to head of homicide. Amid blistering personal social media attacks, Gamache sets out on his first assignment - to find a missing woman. But as he leads the search for Vivienne Godin, Three Pines itself is threatened when the river breaks its banks, and a province-wide emergency is declared.

"As the waters rise, a body is discovered - and the victim's distraught father contemplates a murder of his own. As a father himself, Gamache is haunted by a question - what would he do, if his child's killer might walk free?"

Many Rivers to Cross, by Peter Robinson, read by Simon Slater

"When the body of a teenage boy is found stuffed into a wheely bin on the East Side Estate, Banks and Annie have a homegrown murder case to solve. But Banks' attention is also on Zelda, who, in helping him track down his old enemy, has put herself in danger and alerted the stone-cold Eastern European sex traffickers who brought her to the UK."

"Marnie Salt has made so many mistakes in her life that she fears she will never get on the right track. But when she 'meets' an old lady on a baking chatroom and begins confiding in her, little does she know how her life will change. Arranging to meet, Marnie discovers that Lilian is every bit as delightful as she'd hoped - and that she owns a whole village in the Yorkshire Dales. And when Marnie needs a refuge after a crisis, she ups sticks and heads for Wychwell.

"But soon Marnie finds that Wychwell has claimed her as its own. Even if what she has to do makes her as unpopular as a force 12 gale in a confetti factory!"

Nothing Ventured, by Jeffrey Archer, read by George Blagden

"William Warwick has always wanted to be a detective and decides, much to his father’s dismay, that rather than become a barrister like his father, Sir Julian Warwick QC, and his sister Grace, he will join London’s Metropolitan Police Force.

"After graduating from university, William begins a career that will define his life: from his early months on the beat under the watchful eye of his first mentor, Constable Fred Yates, to his first high-stakes case as a fledgling detective in Scotland Yard’s arts and antiquities squad. Investigating the theft of a priceless Rembrandt painting from the Fitzmolean Museum, he meets Beth Rainsford, a research assistant at the gallery whom he falls hopelessly in love with, even as Beth guards a secret of her own that she’s terrified will come to light.

"While William follows the trail of the missing masterpiece, he comes up against suave art collector Miles Faulkner and his brilliant lawyer, Booth Watson QC, who are willing to bend the law to breaking point to stay one step ahead of William. Meanwhile, Miles Faulkner’s wife, Christina, befriends William, but whose side is she really on?"

"April 1980 and Jane is the first female detective to be posted to the Met's renowned Flying Squad, commonly known as the 'Sweeney'. Based at Rigg Approach in East London, they investigate armed robberies on banks, cash in transit and other business premises.

"Jane thinks her transfer is on merit and is surprised to discover she is actually part of a short term internal experiment, intended to have a calming influence on a team that likes to dub themselves as the 'Dirty Dozen'. The men on the squad don't think a woman is up to the dangers they face when dealing with some of London's most ruthless armed criminals, who think the only 'good cop' is a dead cop.

"Determined to prove she's as good as the men, Jane discovers from a reliable witness that a gang is going to carry out a massive robbery involving millions of pounds. But she doesn't know who they are, or where and when they will strike."

The Holiday, by T. M. Logan, read by Laura Kirman

"It was supposed to be the perfect holiday, dreamed up by Kate as the ideal way to turn 40: four best friends and their husbands and children in a luxurious villa under the blazing sunshine of Provence. But there is trouble in paradise. Kate suspects that her husband is having an affair, and that the other woman is one of her best friends. One of these women is willing to sacrifice years of friendship and destroy her family. But which one?

"As Kate closes in on the truth in the stifling Mediterranean heat, she realises too late that the stakes are far higher than she ever imagined. Because someone in the villa is prepared to kill to keep their secret hidden."

"In this comedic and educational hopscotch over anatomy, the history of sexual representation and the sticky way all human interactions are underwritten by wealth, Pascoe explores whether we'll ever be able to escape the Conundrum of Heterosexuality if women can't help but admire status, and men obsess about youth and physicality.

The Scandalous Lady W: an eighteenth-century tale of sex, scandal and divorce, by Hallie Rubenhold, read by Emily Pennant-Rea

"She was a spirited young heiress. He was a handsome baronet with a promising career in government. Their marriage had the makings of a fairytale but ended as one of the most salacious and publicised divorces in history. Hallie Rubenhold tells the story of one of the first examples of media frenzy surrounding a celebrity divorce."