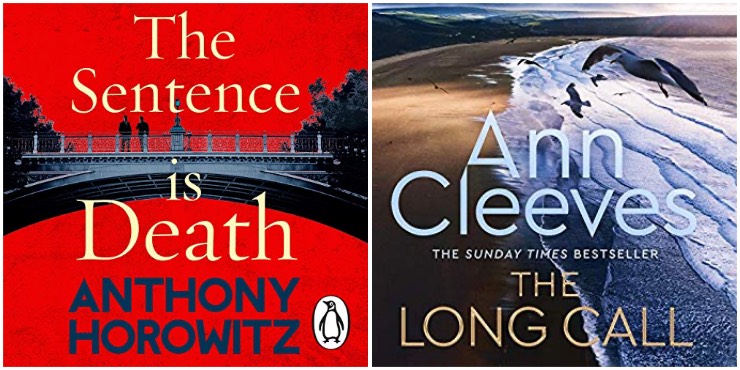 The Secret of Cold Hill, by Peter James, read by Jack Hawkins

"Cold Hill House has been razed to the ground by fire, replaced with a development of ultra-modern homes. Gone with the flames are the violent memories of the house's history, and a new era has begun.

"Although much of Cold Hill Park is still a construction site, the first two families move into their new houses. For Jason and Emily Danes, this is their forever home, and for Maurice and Claudette Penze-Weedell, it's the perfect place to live out retirement.

"Despite the ever present rumble of cement mixers and diggers, Cold Hill Park appears to be the ideal place to live. But looks are deceptive and it's only a matter of days before both couples start to feel they are not alone in their new homes."

The Testaments, by Margaret Atwood, read by Ann Dowd

"When the van door slammed on Offred's future at the end of The Handmaid's Tale, readers had no way of telling what lay ahead. With The Testaments, the wait is over. Margaret Atwood's sequel picks up the story 15 years after Offred stepped into the unknown, with the explosive testaments of three female narrators from Gilead."

The Secret Commonwealth, by Philip Pullman, read by Michael Sheen

"The Secret Commonwealth sees Lyra, now 20 years old, and her daemon Pantalaimon, forced to navigate their relationship in a way they could never have imagined, and drawn into the complex and dangerous factions of a world that they had no idea existed. Pulled along on his own journey too is Malcolm; once a boy with a boat and a mission to save a baby from the flood, now a man with a strong sense of duty and a desire to do what is right.

"Theirs is a world at once familiar and extraordinary, and they must travel far beyond the edges of Oxford, across Europe and into Asia, in search for what is lost - a city haunted by daemons, a secret at the heart of a desert, and the mystery of the elusive Dust."

A Single Thread, by Tracy Chevalier, read by Fenella Woolgar

"It is 1932, and the losses of the First World War are still keenly felt. Violet Speedwell, mourning for both her fiancé and her brother and regarded by society as a 'surplus woman' unlikely to marry, resolves to escape her suffocating mother and strike out alone.

"A new life awaits her in Winchester. Yes, it is one of draughty boarding-houses and sidelong glances at her naked ring finger from younger colleagues; but it is also a life gleaming with independence and opportunity. Violet falls in with the broderers, a disparate group of women charged with embroidering kneelers for the Cathedral, and is soon entwined in their lives and their secrets. As the almost unthinkable threat of a second Great War appears on the horizon Violet collects a few secrets of her own that could just change everything."

All That's Dead, by Stuart MacBride, read by Steve Worsley

"Inspector Logan McRae is looking forward to a nice simple case - something to ease him back into work after a year off on the sick. But the powers-that-be have other ideas. The high-profile anti-independence campaigner, Professor Wilson, has gone missing, leaving nothing but bloodstains behind. There's a war brewing between the factions for and against Scottish Nationalism. Infighting in the police ranks. And it's all playing out in the merciless glare of the media.

"Logan's superiors want results, and they want them now. Someone out there is trying to make a point, and they're making it in blood. If Logan can't stop them, it won't just be his career that dies."

"Midsummer's Eve, 1648, and England is in the grip of civil war between renegade King and rebellious Parliament. Alinor, a descendant of wise women, crushed by poverty and superstition, waits in the graveyard under the full moon for a ghost who will declare her free from her abusive husband. Instead she meets James, a young man on the run, and shows him the secret ways across the treacherous marsh, not knowing that she is leading disaster into the heart of her life.

"Suspected of possessing dark secrets in superstitious times, Alinor's ambition and determination mark her out from her neighbours. This is the time of witch-mania, and Alinor, a woman without a husband, skilled with herbs, suddenly enriched, arouses envy in her rivals and fear among the villagers, who are ready to take lethal action into their own hands."

The Giver of Stars, by Jojo Moyes, read by Julia Whelan

"England, late 1930s, and Alice Wright - restless, stifled - makes an impulsive decision to marry wealthy American Bennett van Cleve and leave her home and family behind. But stuffy, disapproving Baileyville, Kentucky, where her husband favours work over his wife, and is dominated by his overbearing father, is not the adventure - or the escape - that she hoped for. That is, until she meets Margery O'Hare - daughter of a notorious felon and a troublesome woman the town wishes to forget.

"Margery's on a mission to spread the wonder of books and reading to the poor and lost - and she needs Alice's help. Trekking alone under big open skies, through wild mountain forests, Alice, Margery and their fellow sisters of the trail discover freedom, friendship - and a life to call their own."

The Long Call, by Ann Cleeves, read by Ben Aldridge

"In North Devon, where the rivers Taw and Torridge converge and run into the sea, Detective Matthew Venn stands outside the church as his father's funeral takes place. The day Matthew turned his back on the strict evangelical community in which he grew up, he lost his family, too.

"Now he's back, not just to mourn his father at a distance but to take charge of his first major case in the Two Rivers region, a complex place not quite as idyllic as tourists suppose.

"A body has been found on the beach near to Matthew's new home: a man with the tattoo of an albatross on his neck, stabbed to death.

"Finding the killer is Venn's only focus, and his team's investigation will take him straight back into the community he left behind, and the deadly secrets that lurk there."

The Sentence is Death, by Anthony Horowitz, read by Rory Kinner

"William Pryce is an elegant, smooth-tongued lawyer who has made a fortune out of celebrity divorces - and a lot of enemies in the process. Unmarried himself, he lives in a handsome bachelor pad on the edge of Hampstead Heath. Or, rather, he used to....

"When he is found murdered, the police confront the most baffling of mysteries: who was the visitor who came to Pryce's house moments before he died, arriving while he was still talking on the phone?

"'You shouldn’t be here. It’s too late...' were Pryce’s last recorded words, but what exactly do they mean? Why does his killer paint a three-digit number on the wall before leaving the crime scene? And why exactly was he bludgeoned to death with a bottle of wine - a 1982 Chateau Lafite worth £3,000 - when he didn't drink alcohol?

"The police are forced to hand the case to private investigator Daniel Hawthorne, who takes it on with characteristic relish. But Hawthorne himself has secrets to hide, and as our reluctant narrator becomes ever more embroiled in the case he realises that these are secrets that need to be exposed - even if it puts his own life in danger...."

"Cilka is just sixteen years old when she is taken to Auschwitz-Birkenau Concentration Camp, in 1942. The Commandant at Birkenau, Schwarzhuber, notices her long beautiful hair, and forces her separation from the other women prisoners. Cilka learns quickly that power, even unwillingly given, equals survival.

"After liberation, Cilka is charged as a collaborator for sleeping with the enemy and sent to Siberia. But what choice did she have? And where did the lines of morality lie for Cilka, who was sent to Auschwitz when still a child?

"In a Siberian prison camp, Cilka faces challenges both new and horribly familiar, including the unwanted attention of the guards. But when she makes an impression on a woman doctor, Cilka is taken under her wing. Cilka begins to tend to the ill in the camp, struggling to care for them under brutal conditions."