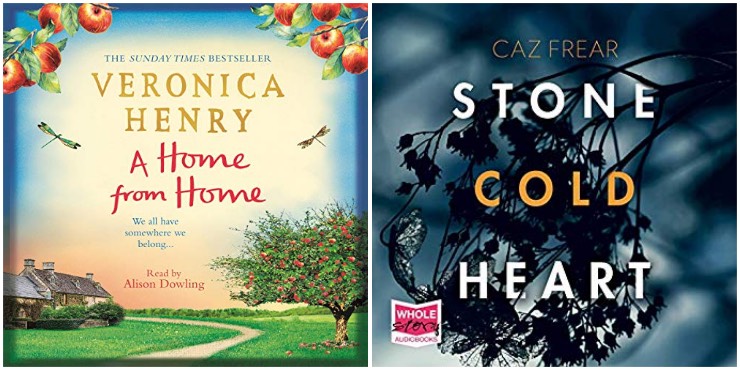 Lock Every Door, by Riley Sager, read by Stephanie Cannon

"No visitors. No disturbing the other residents, all of whom are rich or famous or both. These are the rules for Jules Larsen's new job as an apartment sitter in a high-profile and mysterious Manhattan building. Recently heartbroken and just plain broke, Jules is taken in by the splendour of her surroundings and accepts the terms.

"Soon, Jules finds herself drawn to fellow apartment sitter Ingrid, who comfortingly reminds her of the sister she lost eight years ago. When Ingrid confides that the Bartholomew is not what it seems and the dark history is starting to frighten her, Jules brushes it off as a harmless ghost story - until the next day, when Ingrid disappears."

A Home from Home, by Veronica Henry, read by Alison Dowling

"Dragonfly Farm has been a home for generations of Melchiors - arch-rivals to the Culbones, who live across the river. Life is dictated by the seasons and cider-making, and for cousins Tabitha and Georgia, it is a home from home.

"When tragedy befalls their great-uncle, it seems the farm might belong to them - but the will reveals that a third share has been left to a Culbone. Gabriel has no idea why he's been included, or what his connection to the farm - or the Melchiors - can be. As the first apples begin to fall, will Dragonfly Farm give up its secrets?"

"A cure for Alzheimer's would be worth billions. And well worth killing for. Simon Ayot is an Englishman working for Revere Partners, one of Boston's top venture-capital firms. The firm's star investment, worth millions of dollars for each of its partners, is BioOne, which is working on a cure for the disease.

"Frank, one of Simon's bosses and his father-in-law, is found murdered at his summer house in the marshes, and Simon is in the frame. To stay alive, and to save his marriage, Simon must figure out who killed Frank. And who will be the next to die."

"When council officer Chris Buckley is approached by an odd old man demanding help in healing a decades-old family rift, he sends the stranger away.

"But then the old man is murdered, and the police arrive on the Chris's doorstep asking questions to which he has no answers.

"As Chris begins to look into the circumstances of the murder, he uncovers a deadly secret in the silt and mud of the local canals that he'll realise was better kept buried."

A Cornish Summer, by Catherine Alliott, read by Gemma Whelan

"Flora's been in love with her husband for 20 years. The trouble is, he's been married to someone else for the past 15.

"Now she's been invited to spend the summer in the shady lanes and sandy coves of Cornwall. It should be blissful. There's just one small snag: she'll be staying with her former mother-in-law, Belinda.

"And Flora discovers she's not the only one invited when her ex-husband shows up out of the blue, complete with his new wife. So now there are two small snags.

"Can Flora spend the summer playing happy families with the woman who stole her husband's heart, and the mother-in-law who might have had a hand in it? Or will stumbling on the family secret change her mind about them all?"

Beneath the Surface, by Fiona Neill, read by Emilia Fox

"After a chaotic childhood, Grace Vermuyden is determined her own daughters will fulfil the dreams denied to her. Lilly is everyone's golden girl, the popular, clever daughter she never had to worry about. So when she mysteriously collapses in class, Grace's carefully ordered world begins to unravel.

"Dark rumours swirl around their tight-knit community on the edge of the Fens as everyone comes up with their own theories about what happened. Consumed with paranoia, and faced with increasing evidence that Lilly has been leading a secret life, Grace starts to search for clues.

"Left to her own devices, 10-year-old Mia develops some wild theories of her own that have unforeseen and devastating consequences for the people she loves most.

"Beneath the Surface explores the weight of the past upon the present, the burden of keeping secrets and what happens when children get caught in the undercurrents of adult relationships."

Close to Where the Heart Gives Out: a year in the life of an Orkney doctor, by Malcolm Alexander, read by David Monteath

"Set in the wild and remote landscape of Eday, part of the Orkney archipelago, Close to Where the Heart Gives Out is an unflinchingly honest and moving tale of rural life, from the only doctor on the island."

Listening to the Animals: Becoming the Supervet, written and read by Noel Fitzpatrick

"Professor Noel Fitzpatrick is a world-renowned neuro-orthopaedic veterinary surgeon, the founder of Fitzpatrick Referrals in Surrey, and the star of the hit television series The Supervet, now in its 11th series.

"Renowned for performing unique and cutting-edge surgeries, Noel is often the last chance for the animals that have been referred into his care, as he pushes the boundaries of science, medicine and regenerative bionic technology with his compassionate and visionary approach."

"When DC Cat Kinsella is approached by Joseph Madden for help with his wife, Rachel, there's not much she can do. Joseph claims that Rachel has been threatening him but can't - or won't - give Cat details as to why.

"Dismissing it as a marriage on the rocks, Cat forgets about it. That is until Naomi Lockhart, a young PA, is found dead after a party attended by both Joseph and Rachel, and Joseph is arrested for the murder. Joseph says his wife is setting him up. His wife says he didn't do it. The trail of evidence leads to even more questions...

"Adulterer. Murderer. Victim. Who would you believe?"

"On one life-changing summer 16-year-old Charlie meets Fran. This is a hymn to the tragicomedy of ordinary lives, a celebration of the reviving power of friendship and that brief, blinding explosion of first love that perhaps can only be looked at directly once it has burned out."