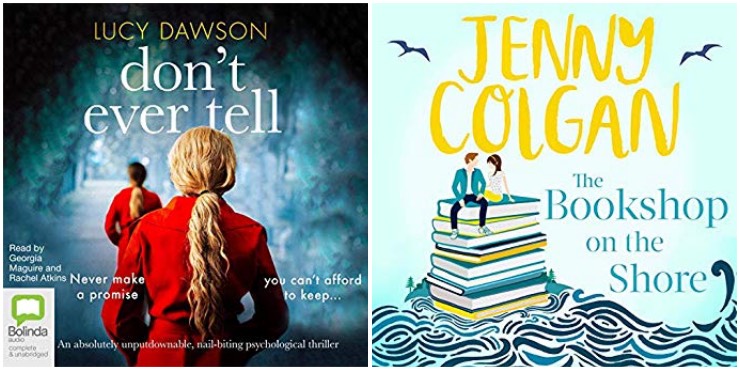 "This is a story about Charlotte - a mother and a wife with the perfect job, the perfect life - at least, that's how it looks from the outside. But behind closed doors, the marriage is breaking, and Charlotte's husband Tris doesn't even know how much. He has no idea what Charlotte has planned for him, who she has found, why she has hired someone to pretend to be her. But he doesn't have long to wait to find out."

"London, 2019. Life has been easy for Maxim Trevelyan. With his good looks, aristocratic connections and money, he's never had to work, and he's rarely slept alone. But all that changes when tragedy strikes and Maxim inherits his family's noble title, wealth, and estates, and all the responsibility that entails. It's a role he's not prepared for and one that he struggles to face.

"But his biggest challenge is fighting his desire for an unexpected, enigmatic young woman who's recently arrived in England, possessing little more than a dangerous and troublesome past. Reticent, beautiful and musically gifted, she's an alluring mystery, and Maxim's longing for her deepens into a passion that he's never experienced and dares not name.

"Just who is Alessia Demachi? Can Maxim protect her from the malevolence that threatens her? And what will she do when she learns that he's been hiding secrets of his own?"

"Changes are coming to 44 Scotland Street, what with Bertie and his friends getting older, and the neighbours gossiping about Irene's latest drama. Still, at the end of the day, the community of Edinburgh's New Town will find itself drawn together in surprising ways in this latest instalment of Alexander McCall Smith's witty, humorous, and engaging series."

The Bookshop on the Shore, by Jenny Colgan, read by Eilidh Beaton

"Escape to the Scottish Highlands, where a tiny bookshop perches on the edge of a loch.

"Zoe is a single mother, sinking beneath the waves trying to cope by herself in London. Hari, her gorgeous little boy, is perfect in every way - except for the fact that he just doesn't speak at all.

"When her landlord raises the rent on her flat, Zoe doesn't know where to turn. Then Hari's aunt suggests Zoe could move to Scotland to help run a bookshop. Going from the lonely city to a small village in the Highlands could be the change Zoe and Hari desperately need.

"Faced with an unwelcoming boss, a moody, distant bookseller named Ramsay Urquart, and a band of unruly children, Zoe wonders if she's made the right decision. But Hari has found his very first real friend, and no one could resist the beauty of the loch glinting in the summer sun. If only Ramsay would just be a little more approachable....

"In 1906, a groundbreaking Rolls-Royce prototype known as the Grey Ghost vanishes from the streets of Manchester, and it is only the lucky intervention of an American detective named Isaac Bell that prevents it from being lost forever. Not even he can save the good name of Marcus Peyton, however, the man wrongly blamed for the theft, and more than 100 years later, it is his grandson who turns to Sam and Remi Fargo to help prove his grandfather's innocence.

"But there is even more at stake than any of them know. For the car has vanished again, and in it is an object so rare that it has the capacity to change lives. Men with everything to gain and a great deal to lose have a desperate plan to find it - and if anybody gets in their way? They have a plan for that, too."

The Marketmaker, by Michael Ridpath, read by David Thorpe

"Tough City brokers Dekker Ward created, and dominate, the turbulent market in Latin American bonds. Ricardo Ross is their most successful trader: they call him the Marketmaker. You're either with him or you've made an enemy for life.

"Disgruntled academic Nick Elliot is Dekker's greenest trader, content to ride his luck as the new boy on the stand. Until strange things start happening to Dekker's employees. One top trader is fired, another dies in a bungled robbery. Nick falls for his colleague Isabel. Then she is kidnapped. Just what sort of business is he involved in? And has he left it too late to run away?"

"Charismatic chef Jared Keaton is serving a life sentence for the murder of his daughter, Elizabeth. Her body was never found and Keaton was convicted largely on the testimony of Detective Sergeant Washington Poe. So when a young woman staggers into a police station with irrefutable evidence that she is Elizabeth Keaton, Poe finds himself on the wrong end of an investigation that could cost him dearly.

"Helped by the only person he trusts, the brilliant but socially awkward Tilly Bradshaw, Poe races to answer the question: how can someone be both dead and alive at the same time?"

Something to Tell You, by Lucy Diamond, read by Clare Wille

"When Frankie stumbles upon an unopened letter from her late mother, she's delighted to have one last message from her - until she reads the contents and discovers the truth about her birth. Brimming with questions, she travels to York to seek further answers from the Mortimer family, but her appearance sends shockwaves through them all."

"In the Carnival days leading up Mardi Gras, Detective Caleb Rooney comes under investigation for a murder he is accused of committing in the line of duty - as a Major Crimes detective for the New Orleans Police Department. Has his sideline at the Killer Chef food truck given him a taste for murder?

"While fighting the charges against him, Rooney makes a pair of unthinkable discoveries. His beloved city is under threat of attack. And these would-be terrorists may be local."

Run Away, by Harlan Coben, read by Steven Weber

"She’s addicted to drugs and to an abusive boyfriend. You haven’t seen her in six months.

"Then you find her busking in New York’s Central Park. But she’s not the girl you remember. This woman is frail, filthy, terrified and in more trouble than you ever imagined. You don’t stop to think. You approach her. You beg her to come home. She runs.

"You follow. What choice do you have? And as you descend into the dark, dangerous world she's lost herself in, you quickly find yourself out of your depth. Down here, no one is safe – and now both of you might never make it out alive..."