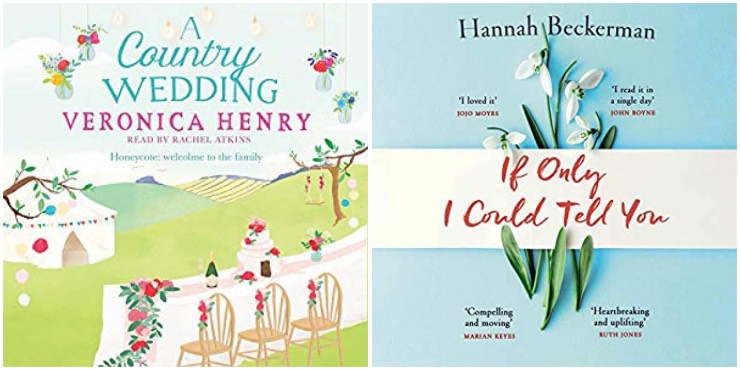 If Only I Could Tell You, by Hannah Beckerman, read by Nicky Diss

"Audrey's family has fallen apart. Her two grown-up daughters, Jess and Lily, are estranged, and her two teenage granddaughters have never been allowed to meet. A secret that echoes back thirty years has splintered the family in two, but is also the one thing keeping them connected.

"As tensions reach breaking point, the irrevocable choice that one of them made all those years ago is about to surface. After years of secrets and silence, how can one broken family find their way back to each other?"

The Taking of Annie Thorne, by C. J. Tudor, read by Richard Armitage

"One night, Annie went missing. Disappeared from her own bed. There were searches, appeals. Everyone thought the worst. And then, miraculously, after forty-eight hours, she came back. But she couldn't, or wouldn't, say what had happened to her.

"Something happened to my sister. I can't explain what. I just know that when she came back, she wasn't the same. She wasn't my Annie. I didn't want to admit, even to myself, that sometimes I was scared to death of my own little sister."

The Librarian, by Salley Vickers, read by Melissa Berry

"Sylvia Blackwell, a young woman in her twenties, moves to East Mole, a quaint market town in middle England, to start a new job as a children's librarian. But the apparently pleasant town is not all it seems. Sylvia falls in love with an older man - but it's her connection to his precocious young daughter and her neighbours' son which will change her life and put them, the library and her job under threat. How does the library alter the young children's lives and how do the children fare as a result of the books Sylvia introduces them to?"

"At first, it seems an ordinary house in an upscale part of Boston. Lawn, white picket fence, car out front, front door opened just a crack. Inside a man lies dead. Crimson splatters over the walls, pools on the floor. And on the stairs, a young woman waits. Covered in blood, she is holding a gun.

"An open-and shut-case, Detective DD Warren thinks, particularly as when she last saw the suspect she had just shot her own father. That time the killing had been an accident. This time it seems horribly intentional - or is it?"

In the Full Light of the Sun, by Clare Clark, read by Helen Duff, Jonathan Keeble & Mike Rogers

"In the Full Light of the Sun follows the fortunes of three Berliners caught up in a devastating scandal of 1930s Germany. It tells the story of Emmeline, a wayward, young art student; Julius, an anxious, middle-aged art expert; and a mysterious art dealer named Rachmann who are at the heart of Weimar Berlin at its hedonistic, politically turbulent apogee and are whipped up into excitement over the surprising discovery of 32 previously unknown paintings by Vincent van Gogh.

"Based on a true story, unfolding through the subsequent rise of Hitler and the Nazis, this gripping tale is about beauty and justice, and the truth that may be found when our most treasured beliefs are revealed as illusions."

A Country Wedding, by Veronica Henry, read by Rachel Atkins

"In the village of Honeycote, country life is anything but quiet. Maybe it's something to do with all that fresh air, but it's the kind of place where passions run high. Where old families meet new money, and old husbands meet new girlfriends."

"Children are killing themselves across the State of Tennessee. Is it a horrible coincidence, or are dark forces at work?

"When Jack Nightingale learns that there is a mysterious list of children who are at risk, he takes the case, spurred on by the fact that he knows one of the names and that makes it personal. His investigation brings him up against a demon from Hell who is being used on a mission of revenge. But if Nightingale is to save the children, and his own soul, he'll need help from an old adversary."

"A hot summer on the Northumberland coast and Julie Armstrong arrives home from a night out to find her son strangled, laid out in a bath of water and covered with wild flowers.

"This stylised murder scene has Inspector Vera Stanhope intrigued. But then another body is discovered in a rock pool, the corpse again strewn with flowers. Vera must work quickly to find this killer who is making art out of death.

"As local residents are forced to share their deepest, darkest secrets, the killer watches, waits and plans to prepare another beautiful, watery grave..."

"Special Agent Gideon Reynolds has tried hard to put his past behind him. He escaped the violence of his cult upbringing when he was just 13, and since then routine and discipline have been his way of making sense of the world. But when a petite blonde woman crashes into his life, he begins to realise that a little bit of chaos might not be so bad.

"Daisy Dawson has had more than her fair share of pain too - but she's done being a victim. Daisy's determined to explore every new experience she can - including getting to know the dark and serious FBI investigator she meets when she fights off a masked attacker one night.

"It soon becomes clear that Daisy's attack was just the beginning. Now the bloodied bodies of young women are showing up all over California, and, as Gideon tries to find the killer, it's clear that Daisy is in more danger than they ever realised."

A Family Recipe, by Veronica Henry, read by Julia Barrie

"Laura Griffin is preparing for an empty nest. The thought of Number 11 Lark Hill falling silent - a home usually bustling with noise, people and the fragrant smells of something cooking on the Aga - seems impossible. Laura hopes it will mean more time for herself, and more time with her husband, Dom. But when an exposed secret shakes their marriage, Laura suddenly feels as though her family is shrinking around her.

"Feeling lost, she turns to her greatest comfort: her grandmother's recipe box, a treasured collection dating back to the Second World War. Everyone has always adored Laura's jams and chutneys, piled their sandwiches high with her pickles. Inspired by a bit of the old Blitz spirit, Laura has an idea that gives her a fresh sense of purpose. Full of fierce determination, Laura starts carving her own path. But even the bravest woman needs the people who love her."