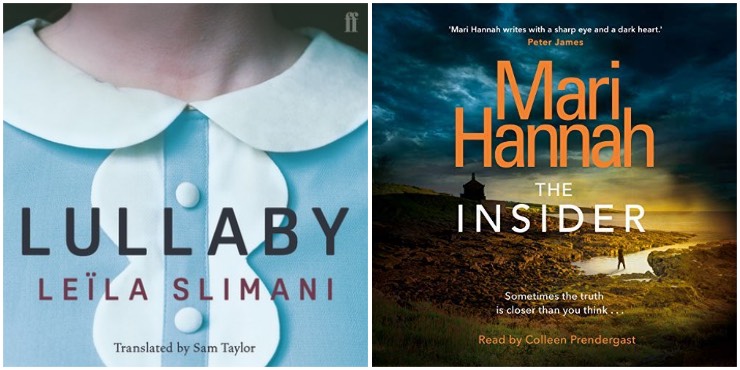 "Darrow is a Helldiver, one of a thousand men and women who live in the vast caves beneath the surface of Mars, generations of people who spend their lives toiling to mine the precious elements that will allow the planet to be terraformed. Just knowing that, one day, people will be able to walk the surface of the planet is enough to justify their sacrifice. The Earth is dying, and Darrow and his people are the only hope humanity has left - until the day Darrow learns that it is all a lie."

"The body of a young girl is found dumped on the roadside on the outskirts of Edinburgh. When pathologists examine the remains, they make a gruesome discovery: the silhouette of a doll carved in the victim's skin.

"DCI Ava Turner and DI Luc Callanach are struggling to find leads in the case, until a doll made of skin is found nestled beside an abandoned baby. After another young woman is found butchered, Luc and Ava realise the babydoll killer is playing a horrifying game. And it's only a matter of time before he strikes again. Can they stop another victim from being silenced forever - or is it already too late?"

"When Myriam, a French-Moroccan lawyer, decides to return to work after having children, she and her husband look for the perfect caretaker for their two young children. They never dreamed they would find Louise: a quiet, polite and devoted woman who sings to their children, cleans the family's chic apartment in Paris's upscale 10th arrondissement, stays late without complaint and is able to host enviable birthday parties.

"The couple and nanny become more and more dependent on each other. But as jealousy, resentment and suspicions increase, Myriam and Paul's idyllic tableau is shattered."

The Coffin Path, by Katherine Clements, read by Helen Longworth

"Maybe you've heard tales about Scarcross Hall, the house on the old coffin path that winds from village to moor top. They say there's something up here, something evil.

"Mercy Booth isn't afraid. The moors and Scarcross are her home and lifeblood. But, beneath her certainty, small things are beginning to trouble her. Three ancient coins missing from her father's study, the shadowy figure out by the gatepost, an unshakeable sense that someone is watching.

"When a stranger appears seeking work, Mercy reluctantly takes him in. As their stories entwine, this man will change everything. She just can't see it yet."

The Insider, by Mari Hannah, read by Colleen Prendergast

"When the body of a young woman is found by a Northumberland railway line, it's a baptism of fire for the Murder Investigation Team's newest detective duo: DCI David Stone and DS Frankie Oliver. The case is tough by anyone's standards, but Stone is convinced that there's a leak in his team - someone is giving the killer a head start on the investigation. Until he finds out who, Stone can only trust his partner.

"But Frankie is struggling with her own past. And she isn't the only one being driven by a personal vendetta. The killer is targeting these women for a reason. And his next target is close to home."

"Fifteen years ago Ryder Creed's sister, Brodie, disappeared from an interstate rest stop. She was only eleven and Creed was fourteen. Since then her disappearance has haunted him, so much so that Creed has dedicated his life to training dogs for scent detection.

"Many miles away, FBI special agent Maggie O'Dell stumbles upon a clue that may explain what happened to Brodie Creed all those years ago. The search and scavenger hunt that follows will be as gut-wrenching for Creed, as are the answers he discovers."

"Legendary sleuth V.I. Warshawski returns to the Windy City to save an old friend's nephew from a murder arrest. The case involves a stolen artefact that could implicate a shadowy network of international criminals.

"As V.I. investigates, the detective soon finds herself tangling with the Russian mob, ISIS backers, and a shady network of stock scams and stolen art that stretches from Chicago to the East Indies and the Middle East."

"Annie is the dream wife. Supportive, respectful, mild-mannered - everything her husband wants her to be. But, underneath, she is so much more. Annie is a prisoner in her own life. Her finances, her routine and her contact with the outside world are all controlled by him. Only her love for her little boy keeps her sane, and at night she escapes into a dream world where she is free.

"But Annie is about to do a very bad thing - and you won't believe how she is going to do it."

Where the Missing Go, by Emma Rowley, read by Beth Eyre & Elaine Fellows

"My name is Kate. I volunteer at a Missing Persons helpline - young people who have run away from home call me and I pass on messages to their loved ones, no questions asked. I don't get many phone calls, and those I do are usually short and vague, or pranks.

"But this morning a girl named Sophie called. I'm supposed to contact her parents to let them know their child is safe. The problem is, Sophie isn't safe. And Sophie is my daughter."

The Puppet Maker, by Danielle Ramsay, read by Mike Rogers

"No one knew about the puppet maker - until DI Brady found what remained of his victims. The murderer never meant them to be found. They are his private collection: each body identical, each - altered.

"Brady knows that now his secret is out, the killer will destroy the evidence, including his latest captive. He must find a man who has hidden the worst of crimes for over 20 years. And whose nameless victims were never even missed."