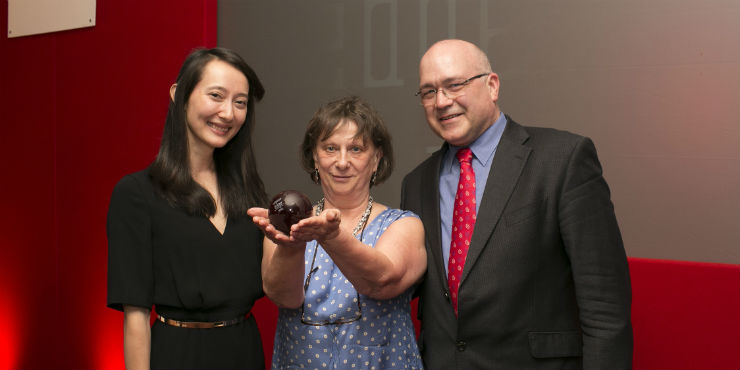 Maureen John, (in the middle) Manager of Stradbroke Library receiving the EDGE ‘social’ award from Jenny Peachey (left), Policy Officer at Carnegie Trust UK and Alistair Gaw, Executive Director of Communities and Families at the City of Edinburgh Council.

EDGE is one of the country’s leading conferences for public library and information professionals and aims to share good practice and discuss future developments. There are three categories – Social, Digital and Community.

It’s the second time Suffolk Libraries has won an award after winning the ‘Digital’ category at the 2014 EDGE Conference for the Get Connected programme to inform customers about online library services. The Club 4 Teenz youth group at Gainsborough Library in Ipswich was also shortlisted in 2013.

The Stradbroke Library project is thought to be the first example of a library service taking on the responsibility of running a post office.

The original village post office closed two years ago and the village shop closed soon after. During this period Stradbroke had no post office, shop or means of cash withdrawals without a journey of at least four miles with very limited access to public transport.

The post office has already been a huge success, prompting a change in opening hours to include a post office collection on Mondays. Monthly visits to the library have increased from just under 1,000 in 2013/14 to an average of about 2,700 per month for the current financial year so far.

The rise in visits is also leading to greater use of library services. Library issues increased by over 1,100 in 2015 and there was also an increase in people registering as library customers. The post office has also helped to provide additional income and means that Suffolk Libraries is now able to sell postage stamps from all the county’s libraries.

The project was a result of Suffolk Libraries working in partnership with the Stradbroke Courthouse and Library Trust (SCALT) and it received great support from Post Office Ltd.

The judges of the EDGE conference stated:

Stradbroke Library Post Office exemplifies how libraries can be the heart of the community, and the vital role both libraries and post offices play in enhancing community life and wellbeing. The increasing number of visits and issues, not to mention the increase in non-users visiting the library, is testimony to the success of the initiative. Through co-location and working in partnership with the local community and by looking to increase its income, Stradbroke embodies a forward-looking and engaged way of working that is as exciting as it is commendable

New Suffolk Libraries video thanks people for their support